Eva Longoria‘ and José Antonio Bastén have tied the knot in Mexico!

A source confirms to PEOPLE that the couple got married in a sunset ceremony in Valle de Bravo, Mexico, a lakeside town roughly 88 miles from Mexico City. According to previous reports, the couple hosted their bash at Baston’s home and finished off the big day with fireworks.

“They married on an altar under lots of little lights,” the source says. “It was very romantic. Eva wore her hair down and smiled during the whole ceremony. He was in a gray suit.”

On Sunday, Longoria shared a shot from the wedding, showing their rings and two cards reading “Jose Baston” and “Eva Baston.”

“In our garden, surrounded by a small gathering of people we love, Pepe and I tied the knot! #TalkAboutBlessed #ImStillFloating #OmgMyFeetHurt,” she wrote.

“I’ve been waiting for a day like this my whole life,” the former Desperate Housewives star told Hola! USA of her wedding day.

In photos posted by Hola! and Al Rojo Vivo, a Telemundo news program, Longoria and Baston can be seen exchanging their vows in front of a giant white cross overlooking the lake. Playing into the ongoing theme of “white elegance,” Longoria wore a white dress designed by Victoria Beckham and her hair was styled by Ken Paves. Bastén was in a gray, three-piece suit by Italian designer Brunello Cucinelli and the couple exchanged simple gold bands by Berger and Son, according to Hola!.

Ricky Martin, Mario Lopez, Melanie Griffith, and Victoria and David Beckham were among the approximately 80 guests who enjoyed cocktails and a live performance by Pro Down – a band comprised of members with special needs – before the ceremony began, according to Hola!.

Griffith shared a video of the fireworks display on Instagram after the ceremony.

In a photo posted by Al Rojo Vivo, the Beckhams are seen mingling with guests on an outdoor terrace.

Another source tells PEOPLE that earlier in the day, the couple spent the day hanging out by the pool with the Beckhams and Martin.

“Eva just looked so happy,” the source says. “She didn’t seem the least stressed about her wedding. You could tell that she very much she enjoyed celebrating her special day with friends.”

The evening was reportedly planned by Bastén’s sister Rosaléa and the ceremony was officiated by a Father Pedro in both English and Spanish. Although Longoria had no bridesmaids, Bastén’s daughters Tali and Mariana walked down the aisle before the couple.

The Desperate Housewives actress, 41, and her new husband, 47, first stepped out as a couple in November 2013. Bastén, president of Latin American media brand Televisa, proposed during a vacation in Dubai in December with a stunning ruby engagement ring.

“He was the most handsome man I’d ever seen. He was so charismatic, charming, sweet and funny. I thought, ‘Who is this guy?!’ ” she said.

This is the third marriage for Longoria, who was previously married to actor Tyler Christopher and NBA star Tony Parker.

After the ceremony, Hola! USA says guests dined on a meal by Eduardo Kholman and Enrique Olvera while the newlyweds danced to Colombian singer Carlos Vives’ “Volvé a Nacer” for their first dance. Longoria was surprised at the reception by her Desperate Housewives costar Vanessa Williams, who revealed her presence at the wedding halfway through her performance of her hit song “Save the Best for Last.”

The couple is now expected to honeymoon through June 9, according to Hola! USA, which will feature photos from the wedding in its inaugural print issue later this year. 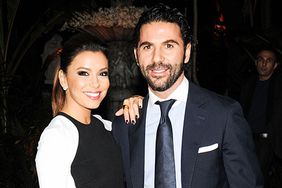