"It's amicable," a source close to the couple tells PEOPLE, but "they are trying to work things out"

“They did break up. It’s amicable,” the source says, adding, “They are talking and trying to figure the best course of action for their future. They are trying to work things out.”

“It’s distance and demanding careers and not living in same city,” said the source. “It didn’t happen yesterday. It’s been going on for a while.”

In an earlier statement issued by Longoria’s rep Liza Anderson on Friday, she said, “Eva and Tony are going through a very difficult time right now, just like any other couple with extremely demanding careers.”

However, a source close to Parker told PEOPLE earlier Friday that Parker said rumors of a breakup were not true.

While Desperate Housewives has been filming in Los Angeles, the San Antonio Spurs departed Texas on Friday afternoon to begin a training camp in France.

Before leaving, Parker joined his team at a “media day” for sportswriters near the San Antonio International Airport, though he did not discuss his relationship with Longoria.

In April, Longoria told PEOPLE she is happiest when in a relationship. “There’s no way in the world I would rather be single,” she said. “Tony is too. I’ve said the only reason Tony and I are going to stay together forever is because we’re too lazy to look for someone else.” 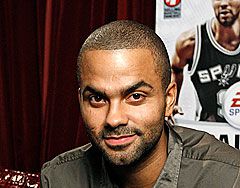