"We wanted someplace romantic," the actress tells PEOPLE of her nuptials to Kyle Martino

Eva Amurri and her soccer commentator beau Kyle Martino have jetted off to their honeymoon following a weekend wedding that mixed Southern hospitality with Hollywood glamour.

“We’re going to the beach to do nothing and drink Piña Coladas, surf, and enjoy some quiet time together,” the bride tells PEOPLE. “We are really looking forward to continue building our life together.”

It was a busy few days surrounding their ceremony in Charleston, S.C., last Saturday, complete with a bridal luncheon and scavenger hunt earlier in the week.

Last Friday night, guests were treated to a casual oyster roast rehearsal dinner with some surprises. Tim Robbins, who helped raise Amurri during his relationship with her mother Susan Sarandon, wrote and performed a song for the couple, as did other guests.

The next day, Sarandon and Robbins, who split in December 2010 after 21 years together, co-hosted the ceremony in the historic Confederate Home.

“We wanted someplace romantic, and that would still be around for us to bring our children to,” Amurri, 26, says. “Charleston has so much history and really fit the bill.”

Amurri, who wore a gown designed by Lela Rose, was walked down the aisle by Robbins and Sarandon, who both gave speeches at the reception.

The ceremony included a twist on classic vows – “We re-worked them to create something more personal,” says Amurri – and was officiated by Sister Helen Prejean, about whom the movie Dead Man Walking was made, starring Sarandon.

“She’s an old family friend,” says a guest. “It just made sense for them to have her do it.”

The black-tie reception that followed, planned by Calder Clark Designs in Charleston, was held at Hibernian Hall.

“It was gorgeous and also totally enclosed for privacy,” says Amurri.

Dinner was “a seafood-heavy menu,” says the bride, because of the coastal location. Guests toasted with Perrier Jouet champagne and enjoyed a first course of Fusilli All’ Amatriciana, a main course of ginger seared halibut and a plethora of decadent desserts.

“We couldn’t decide on one desert so we had six!” laughs Amurri. But no traditional cake for this couple: “Neither of us like it!”

Following dinner the couple got their groove on to a soul band and then a DJ. Robbins spent the night on the dance floor with guests including stylist Brad Goreski and designer Chris Benz, who was in the bridal party.

“Our crowd are big dancers,” says the bride, “so we had to be heavy on the music.” 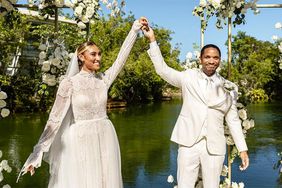