Kim Mathers, wife of chart-busting rapper Eminem, attempted suicide on Friday night at the couple’s suburban Detroit home, said a representative of the Grammy winner’s record label. Police in Sterling Heights, Mich., responded to a medical emergency at the home of Eminem (whose real name is Marshall B. Mathers III) at 11:30 p.m., found the 25-year-old woman and treated her, authorities said in a press release. They had been told that she had tried to kill herself, though police did not provide further details, other than to say she was eventually taken to a hospital for observation and later released. Recently, Eminem was involved in a parking lot skirmish with a man who reputedly had kissed Kim Mathers. The case is pending in court over the rapper’s alleged brandishing of an unloaded gun at the time. “Eminem is obviously concerned about his wife’s well-being,” Dennis Dennehy, of Interscope Records, told the Associated Press. He added that the incident is “a private matter, which they’ll be addressing privately.” Friday night, Eminem was performing in Auburn Hills, Mich.

Eminem: Who Wants to Be a Millionaire? 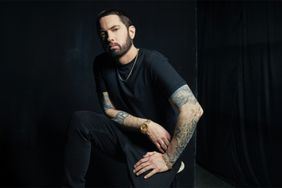