Chartbuster Eminem, 27, is said to be under investigation for possible weapons concealment as authorities look into a weekend skirmish involving the Grammy-winning rapper early Sunday morning outside a suburban Detroit nightclub. So far, two people involved in the incident have been arraigned. Reuters reports that Kimberly Mathers, Eminem’s wife, and another man, Robert Brown, were arraigned Monday on misdemeanor charges of disturbing the peace. (Eminem’s real name is Marshall Mathers.) Brown pleaded not guilty. A similar plea was entered on behalf of Kimberly. While Eminem’s manager told the Detroit Free Press that the brawl occurred outside the Hot Rocks Club when some fans wanted the rap star’s autograph, prosecutors told Reuters that they are following a lead that Eminem and a friend had headed to the club to trail Kimberly, who was suspected of meeting another person. 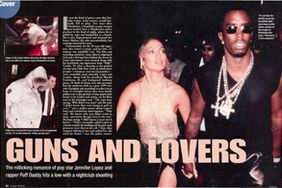