Nick Cannon isn't the first to take issue with the rapper. Vote for your favorite face-off – including one with a puppet

Controversy is nothing new to Eminem. The rapper, who was on the receiving end of Nick Cannon’s scathing blog post this week, has a long history of high-profile feuds with singers, family members and even a puppet. Here’s a rundown of his most explosive encounters – do you have a favorite?

Christina Aguilera
The bad blood started in 2000 when Eminem namechecked Christina Aguilera in his single “The Real Slim Shady,” and stated she had performed oral sex on both MTV veejay Carson Daly and Limp Bizkit’s Fred Durst. “It’s disgusting, it’s offensive and, above all, it’s not true,” an Aguilera rep told the New York Daily News at the time.

Not to be outdone, Aguilera kicked it up another notch, recording a parody rap called “Will the Real Slim Shady Please Shut Up.” She pulled no punches: “Little twit blasts me on his new CD. Why? ‘Cause I turned him down for a date,” she raps. “As for the question of who came first, was it Carson daly or was it Fred Durst? I’m sorry Slim, but this is gonna hurt. They both came closer than you ever will, jerk.”

Debbie Mathers
Proving that no one is sacred in Eminem’s world, the rapper has even feuded with his own mother. After several rocky years, it went into overdrive when he rapped about raping and killing her. The public disparage in 1999 led to her filing a $10 million slander suit against him.

Their fighting escalated through 2007, when Mathers released an explosive tell-all autobiography called My Son Marshall, My Son Eminem: Setting the Record Straight on My Life as Eminem’s Mother.

Now in failing health, Mathers has reached out to her son. Although a reconciliation hasn’t happened yet, Eminem may be softening. “It never once hit me that drug addiction runs in my family,” he told Vibe magazine earlier this month. “Now I understand that I’m an addict, I definitely have compassion for my mother. I get it.”

Kim Mathers
They’ve married twice. They’ve divorced twice. And they’ve talked a lot of smack about each other along the way. The high school sweethearts married in 1999 and divorced two years later, waging a very bitter – and public – custody battle over their daughter, Hailie Jade.

Some highlights: A track on 2000’s The Marshall Mathers LP, called “Kim” fantasizes about choking her to death; Kim told a Detroit radio station in 2007, “I vomit in my mouth whenever I’m around him or whenever I hear his name.” They’ve since agreed in court not to publicly criticize each other for the sake of their daughter, Hailie.

Triumph the Insult Comic Dog
The sarcastic puppet showed up at the 2002 MTV Video Music Awards and skewered several celebrities, including Moby, R Kelly and the Olsen Twins. But when he approached Eminem, the rapper (and his bodyguards) angrily jumped up and pushed Triumph out of the way. Triumph gave a press conference later in the night, wearing a neck brace where his dog collar should be, telling reporters that Eminem needed to “lighten up.” Eminem fired back, impersonating Triumph on the track “Ass Like That” from his 2004 album Encore.

But this feud had a happy ending. In his 2008 autobiography The Way I Am, Eminem admitted that his temper got the better of him. “I’d been so busy touring and doing my own s— that I hadn’t had time to watch TV, so I had no idea what that dog was,” he wrote. “My natural reaction was, ‘Get your f—ing hand out of my face.’ And that’s when I kind of lost it and a half. I should have kept my composure.”

RELATED ARTICLE:
• 2002: Eminem doesn’t like Mariah as a person 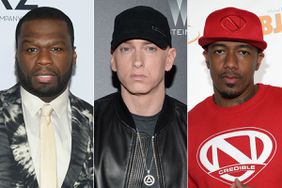 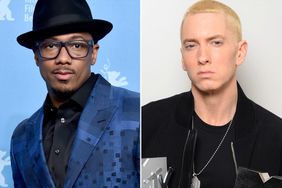 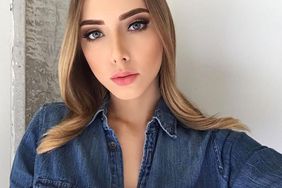 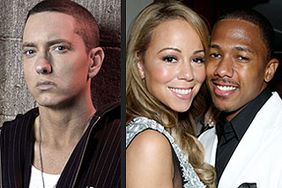