Ellen & Portia to Tie the Knot!

Ellen DeGeneres plans to wed longtime girlfriend Portia de Rossi, she announced during a taping of her show Thursday.

In the episode, airing Friday (the news was first reported by TMZ), DeGeneres revealed the big news and told the crowd, “I’m very excited.” The announcement immediately followed the news that California’s Supreme Court struck down a law banning gay marriage.

De Rossi, 35, was reportedly in the studio when DeGeneres – who just celebrated her 50th birthday – broke the news.

In what’s sure to be a controversial decision, the California’s Supreme Court ruled that people have a fundamental “right to marry” the partner of their choosing – therefore the previous ban on gay marriage was ruled unconstitutional.

The two stars began dating in December 2004, as de Rossi was appearing on the FOX sitcom Arrested Development.

One key to their happiness, DeGeneres , is that they learn from one another. “She’s taught me lessons about myself, and I feel like I’ve taught her,” said the TV host. “We’ve both changed and grown, and we just feel like, ‘Oh, okay, this is completion.’ ” 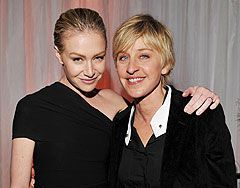 Ellen and Portia Get Married 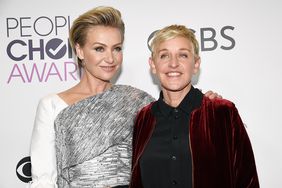