Elisabeth Röhm's Baby 'Will be the Prettiest Flower Girl'

Due in April, the mom-to-be plans for her September wedding to be laid-back

Elisabeth Röhm’s fall wedding to clothing entrepreneur Ron Wooster will be a small affair, but the daughter she’s expecting in April will top the guest list.

“Our daughter may be in a bassinet, but she’ll be the prettiest flower girl. I can’t wait,” Röhm, 34, tells InStyle Weddings in its winter issue of the child she plans to name Easton.

Röhm and Wooster, 40, will marry next September in the backyard of their 1897 farmhouse on the bay in the Hamptons on New York’s Long Island.

“I want a formal but laid-back vibe,” says Röhm, who’s deciding between a strapless and fitted or spaghetti strap style gown. “I know Badgley Mischka will be able to make a dress for me that’s hot and sexy. Since my body’s already changing, I’ll probably wait until after the baby’s born to do my fittings.”

The former Law & Order star will accessorize with the five-carat stackable band diamond ring Wooster gave her when he proposed three months after they moved in together – and heels she plans to kick off. “I hope guests dress glamorously for our wedding, but I’ll probably want to pull off everyone’s high heels at the front door and say, ‘Get real,’ because I’ll be barefoot!”

A Male Maid of Honor

Röhm’s maid of honor will be a male friend, Lash Fary. “When you choose a guy,” she explains, “Your girlfriends can’t get jealous.”

Something to be envious of is the couple’s passionate relationship. Röhm, who met Wooster about two and a half years ago in his clothing store, says, “We’re like Ricky and Lucy! We have a little fight every week, and it’s hilarious and loud, and it’s over as quickly as it started, and no one remembers it.” 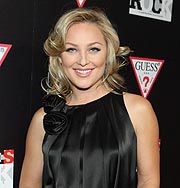