Eddie Murphy and Tracey Edmonds were married on New Year’s Day on a private island off Bora Bora in French Polynesia in front of 25 friends and family, their reps tell PEOPLE.

In a sunset ceremony on the beach Tuesday, Edmonds walked barefoot down the aisle to Gladys Knight’s “Makings of You.” The bride wore a custom-designed form-fitting dress by stylist and designer Sugia Nazel and Jill Baracci, designer and owner of Baracci boutique.

Murphy wore a cream suit and vest with an off-white handkerchief.

The wedding was designed by event designer Colin Cowie, who created a gazebo on the beach made out of 6,000 shells for the ceremony. After the ceremony, guests celebrated at a private dinner and after-party, where DJ Darrin Ebron from Los Angeles kept the guests dancing.

The wedding cake was by Sam Godfrey of Perfect Endings in Napa, CA, and featured four layers in whites and cream with handmade sugar cymbidium and dendrobium orchids.

Edmonds and Murphy started dating last fall and were engaged in July.

See Essence magazine’s gallery of photos of Murphy and Edmonds and other hot couples from last year. 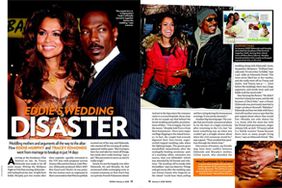