Ed McMahon has been in a Los Angeles-area hospital nearly a month under treatment for pneumonia and other medical issues, and is currently in ICU, a spokesman for the veteran TV fixture confirms to PEOPLE.

“We appreciate everyone’s thoughts and prayers,” said McMahon’s representative and friend, Howard Bragman. The spokesman was responding to a TMZ report about McMahon’s “serious” medical condition.

Best known for his years next to Johnny Carson’s desk on NBC’s Tonight Show – as well as the emcee of Star Search – Mahon, 85, was in the news last year for his financial problems that resulted in the near-foreclosure of his Beverly Hills-area home.

While Bragman did confirm that McMahon is suffering with a respiratory infection, the rep did not specify which hospital is treating him in an intensive care unit, beyond saying, “He’s not at Cedars-Sinai.”

McMahon is suing that medical center for alleged malpractice and elder abuse.

“The family is asking for privacy and we’d like to respect that at this time,” adds Bragman. “We are hoping and praying for the best.” 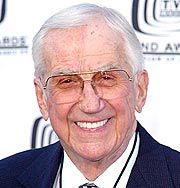