Not only did Ed Asner and Mary Tyler Moore have a special relationship on-screen, but the longtime costars were also dear friends off-camera.

The actress played Mary Richards on the seven-season comedy series, a single 30-year-old who takes the job as an associate producer at a Minneapolis news station. During her time at the station, Mary worked for Asner’s character, Lou Grant. And although Lou had a tough and prickly exterior, she grew close to her boss, who became a lovable mentor.

After learning about Moore’s death on Wednesday, PEOPLE spoke with Asner about his long relationship with the actress, who he said paved the way for women in the workforce: “I think there are still a lot of women out there who say if it wasn’t for her, we wouldn’t be where we are.”

“She was a queen but, she never demonstrated queenly privileges. Her generosity was quite noted,” Asner told PEOPLE. “I was always pleased with the treatment and it was seven years of the yellow brick road. That’s how the Mary Tyler Moore show went.”

The actor said he last saw Moore at a CBS reunion show and remembered the time with the cast as “always sweet, always wonderful and rich” and added of spending time with the actress, “It was great to be with her. She’s a gorgeous lady.”

Although Moore put on a cheerful and “bubbly” facade, the actress endured a great amount of personal struggles throughout her 80 years of life, including diabetes, alcoholism, two failed marriages and the death of her son.

“None of them were any good. She did not get hysterical, but one time her sugar got out of balance and she was slightly hysterical — but that was soon taken care of,” said Asner.

Of overcoming her addiction to alcohol, Asner said, “I don’t know that she really did. I do know that I think after the show … some nights she would have a martini or two martinis and that was it,” and quipped, “Two martinis never killed anybody.”

Despite their closeness, Asner revealed that he didn’t see a change in Moore during the ups and downs of her life that she faced while starring on MTM show: in his eyes, she remained consistent in her emotions.

“I didn’t see a different Mary. The good, steady, strong, hard working Mary,” said Asner. “I think she changed after the show stopped, but I didn’t see any of that.”

In honor of the pair’s special friendship, PEOPLE looks back on five memorable Mary-Lou moments from the MTM show.

While interviewing for a job at the station, Mary confronted Lou about him asking her personal questions.

“It does seem that you’ve been asking a lot of very personal questions that don’t have a thing to do with my qualifications for this job,” she said to Lou.

“You know what, you’ve got spunk,” he said to Mary, who cracked a smile thinking that he appreciated her honesty. “I hate spunk!”

The morning after going out on a not-so-great date, Mary mustered up the courage to ask her boss out on a date. And with great surprise and a chuckle, Asner told her, “You’re out of your mind!” before agreeing to a date that night at Mary’s home.

Lou wanted a new female newscaster as a fresh face at the station. While discussing the idea with his colleagues, he said that he wanted a girl similar to Mary — but he didn’t offer it to Mary because he believed she’d “stink.” Not until Mary approached her boss did he allow her to audition for the position. Unfortunately, he really did just want a “girl like Mary” because she placed sixth in the round of auditions.

Former First Lady Betty Ford made a cameo on the sixth season, but Mary didn’t believe that it was her, as she doubted Lou actually had a group of famous friends. When Mrs. Ford called Lou’s room, Mary still didn’t buy it even when she spoke with her on the phone — and told her that her “impression of Betty Ford really stinks.”

On the last episode of the series, the group was instructed in the script to share one large embrace and then separate shortly after — but improvisation took over and the scene became Moore’s “favorite scene” from more than 160 episodes in which she starred. In the final moments, Lou gave Mary a sweet kiss while singing “It’s a Long Way to Tipperary” to show his love for her as a friend and colleague.

Episodes of the Mary Tyler Moore Show are now available on Hulu. 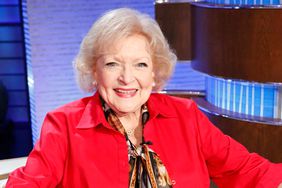 Betty White Jokes About Her 99th Birthday: 'I Can Stay Up as Late as I Want' 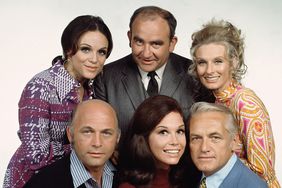 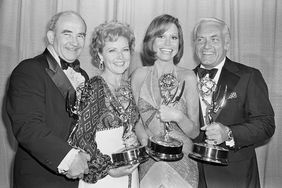 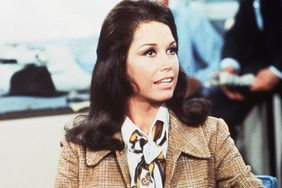 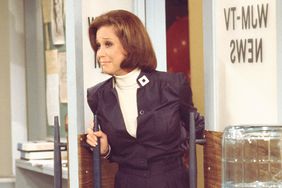 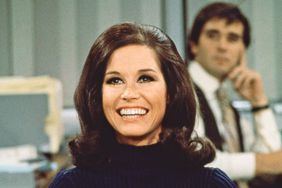 'I Could Not Do What I Do Without Her': 7 Female Comedians on Mary Tyler Moore's Influence 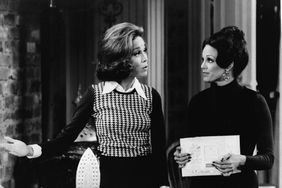 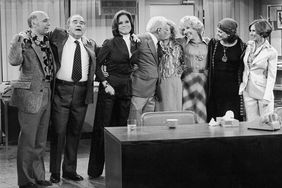