“The X-Files” star David Duchovny and “Buffy the Vampire Slayer” were the big winners at Monday’s TV Guide Awards. In balloting by TV Guide readers, Duchovny was voted favorite actor in a drama and, in a separate online poll, the sexiest and best-dressed male. “Buffy the Vampire Slayer” won in seven of the Internet-survey categories, including best science-fiction fantasy show and (for star Sarah Michelle Gellar) sexiest female. Christina Applegate and French Stewart (“3rd Rock from the Sun”) were the hosts of the ceremony, which aired on Fox-TV. Ms. Applegate was named favorite star of a new series for her NBC sitcom “Jesse.” More than 1.2 million readers sent in the ballots contained in copies of TV Guide, and millions more voted online, the magazine said. 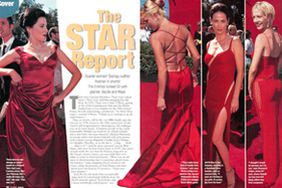