Drew Barrymore Cheers on Ex Will Kopelman with Their Girls at the N.Y.C. Marathon: 'Well Done!!!'

Olivia Wilde was also there to support the runners

Drew Barrymore‘s divorce was finalized in August, but that isn’t stopping her from supporting her ex-husband Will Kopelman.

The actress, 41, joined the couple’s daughters Olive, 4, and Frankie, 2½, to support Kopelman as he participated in the New York City Marathon on Sunday. Barrymore shared a sweet photo of Kopelman holding Olive and Frankie during the race.

The couple, who were married in 2012, announced their split in April.

“Sadly our family is separating legally, although we do not feel this takes away from us being a family,” Barrymore and Kopelman shared in a joint statement to PEOPLE in April. “Divorce might make one feel like a failure, but eventually you start to find grace in the idea that life goes on. Our children are our universe, and we look forward to living the rest of our lives with them as the first priority.”

But Barrymore wasn’t the only star on the sidelines at this year’s marathon. Olivia Wilde shared her own videos from the sidelines of the marathon, including one with runners singing along to Nature By Naughty’s “Hip Hop Hooray.”

The actress and new mom, 32, captioned a video of the runners singing “Ayyy, ohhh!” with several runner emojis. 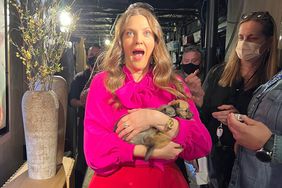