Several hundred demonstrators shouted “shame, shame, shame” outside the Paramount Pictures gates in Hollywood yesterday, protesting the studio’s plan to give controversial radio personality Dr. Laura Schlessinger her own TV show this fall. Dr. Laura, as she is called, is under attack for having called homosexuality a “biological error” and “deviant” on her highly rated syndicated radio show. “When Paramount bought Laura Schlessinger’s show, they bought a battle with the gay community,” Joan Garry, executive director of the Gay and Lesbian Alliance Against Defamation, told the Associated Press. An April charity benefit built around Dr. Laura in Michigan was just canceled when organizers there decided they didn’t want to deal with Schlessinger’s highly vocal opponents. Paramount, however, is remaining firm in its decision to produce the Dr. Laura TV show, and said in a statement that the company is committed to presenting moral and ethical issues without “creating or contributing to an environment of hurt, hate or intolerance.”

Alone at the End 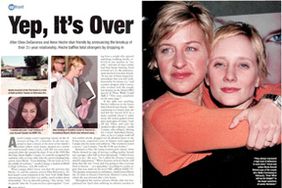