Downey Back in Slammer

Actor Robert Downey Jr. was handcuffed and sent back to jail for a psychiatric examination and drug treatment in Malibu Tuesday after admitting to a judge he had not been able to break his drug habit. The Oscar-nominated actor, 34, was ordered by Municipal Court Judge Lawrence Mira to undergo a psychiatric examination and to be placed in a lock-down drug treatment program at least until another court appearance Aug. 5. Mira ordered Downey back to drug treatment after the actor admitted in court that he had not submitted to court-ordered periodic drug tests since last December.

Downey Back Behind Bars 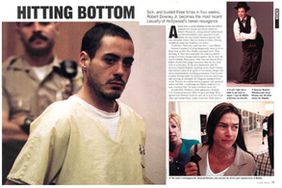 A Clean and Sober Downey Is Released