According to a report in the British press, the singer is making sweet music with a new boyfriend

Does Lily Allen have something to “Smile” about?

Just two months after she traumatically suffered a miscarriage and split with boyfriend Ed Simons of the Chemical Brothers, a report in the British press claims she has found love again.

According to the Sun, Allen, 22, has been living with fellow musician Robertson (Robbie) Furze, a singer and guitarist in a band called The Big Pink, for the past month. (The paper also published a picture of the couple walking arm-in-arm near her North London home.) 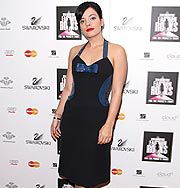