"We remain caring friends and are fully committed to our two boys," say the Dog Whisperer star and his wife

It’s over for Dog Whisperer host Cesar Millan and his wife, Ilusion.

“We are sad to announce that after 16 years of marriage we have decided to file for divorce,” reads a statement on posted Cesar’s Web site Friday. “The decision was made after much consideration and time. We remain caring friends, and are fully committed to the co-parenting of our two boys.”

PEOPLE Pets: What You Don’t Know About Cesar Millan

Millan is the longtime host of the National Geographic Channel’s Dog Whisperer. He famously came to the U.S. as a young man from his native Mexico with $100 in his pocket and a dream of becoming a famous dog trainer. He succeeded – with the help of some famous clients such as Jada Pinkett Smith. In addition to hosting his television show, Millan has authored several best-selling books.

• Cesar’s Next Mission: To Build an ‘International Pack’ 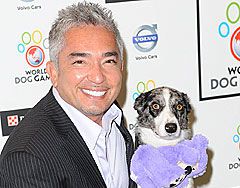