When lead Dixie Chicks singer Natalie Maines criticized President Bush on a London stage three years ago as the Iraqi war was looming, some U.S. radio stations yanked the Texas trio from their broadcast schedules, some fans boycotted the group – and someone threatened to kill her.

“It was definitely scary because it seemed so – it wasn’t just somebody wanting to write a hate letter,” Maines tells 60 Minutes in an interview set to air Sunday, according to excerpts obtained by the Associated Press. “It was somebody who obviously thought they had a plan.”

“There was one specific death threat on Natalie,” says Emily Robison, who plays banjo and guitar, explaining that the warning “had a time, had a place, had a weapon. I mean, everything. … ‘You will be shot dead at your show in Dallas.'”

At a March 10, 2003, concert in the British capital, Maines told the crowd: “Just so you know, we’re ashamed the president of the United States is from Texas.”

Although Maines later apologized for the phrasing of her remark, the Chicks to this day refuse to apologize to fans who were upset by the comment – and underscore that stance in the song “Not Ready to Make Nice” on their latest album, Taking the Long Way, due for release May 23.

“We don’t make decisions based on that,” Maines says. “We don’t go, ‘Okay, our fans are in the red states, so I’m going to play a red, white and blue guitar and put on my I Love Bush T-shirt.”

She added: “We’re not like that because we’re not politicians. We’re musicians.” 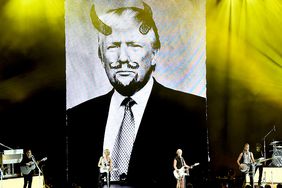 Dixie Chicks Strip to Have Their Say