It was back to school for Sean “Diddy” Combs, who surprised some 750 students when he walked out onstage at Philadelphia’s Benjamin Franklin High School on Monday.

The easily recognizable, bling-outfitted mogul was rewarded with an eruption of cheers, reports the Associated Press.

“This is a really important time for you all right now,” Combs told the kids. “This is the time that is going to dictate your future. It’s important to know what it takes to achieve your dream ”

He also summoned some of the students to stand next to him and recite their life’s goals. His lesson for them: work hard and don’t drop out.

“Take responsibility for your future. No excuses!” said Combs, 36.

The school district also plans to carry Diddy’s words in an anti-truancy campaign, according to Cecilia Cummings, senior vice president for communications and community relations.

Said school principal Christopher Johnson: “We wanted someone whom they would sit down and listen to, someone who comes from the same type of background. To have a superstar come in to talk is extremely powerful.”

Combs’s new album, Press Play, is due next month. 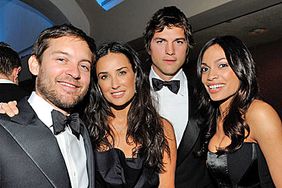