The 7,400-sq.-ft., six-bedroom house that Richards, 35, is leaving also happens to be a just stone’s throw from the home of her rival, Heather Locklear.

Richards (who is seeking part of Sheen’s Screen Actors Guild pension, full custody of their daughters Sam, 2, and Lola, 1, and more than $100,000 a month in child support) has already bought a home in a more “kid-friendly” neighborhood near Los Angeles, says a source.

As for her relationship with Locklear, Richards recently told Entertainment Tonight that they were never “best friends,” as had been reported.

“People have gone on – ‘Would you date your best friend(‘s husband)?’ ” she said. “You know, she wasn’t my best friend. She was a close friend in the last couple of years.” 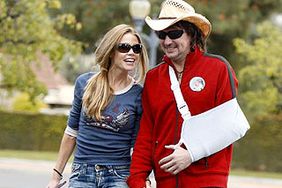