As a move to end the 10-year domestic partnership of My Fair Wedding host David Tutera and Ryan Jurica heads to the courts, Tutera has issued a statement to PEOPLE responding to allegations culled from Jurica’s legal papers, accusing the WE tv celebrity wedding planner of a sexual addiction and the hiring of prostitutes.

“The allegations against me are baseless and untrue and I will fight vigorously to defend my reputation in the court of law as well as the court of public opinion,” says Tutera. “I believe them to be fabrications of a desperate individual in order to gain a legal advantage in our separation.”

He goes on the say: “I am saddened by these developments; I am angered by the lies; and I am committed to moving beyond this painful moment to focus on my professional commitments and the upcoming birth of my children.”

Tutera and Jurica, who wed in Vermont in September 2003, separated on New Year’s Day 2013, according to Los Angeles County Superior Court documents filed by Tutera on April 19 and obtained by PEOPLE. The filing, which cites “irreconcilable differences,” also states that the two men are expecting the birth of twins via a surrogate in July.

But, reports TMZ, on April 17 Jurica filed legal documents in Connecticut to end the union.

In the papers, Jurica claims, according to TMZ, “After repeated attempts at marriage counseling and therapy, we have been unable to save our relationship due to [Tutera’s] addiction to sex.”

In his filing, Tutera seeks full legal and physical custody of the twins, with visitation for Jurica. He also does not wish to pay spousal support and asks that Jurica be responsible for all legal fees related to their split and the division of property.

TMZ reports that in his papers, Jurica, who also is demanding full custody of the unborn children, says Tutera is the breadwinner in the relationship, earning more than $1 million a year.

'My Fair Wedding' 's David Tutera Not-So-Happily Ever After 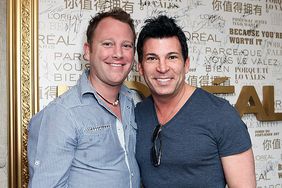