Officials are investigating Dave Mirra's death as a suicide.

Pro-BMX star Dave Mirra was found dead on Thursday from an apparent suicide, PEOPLE confirms. He was 41.

Police in Greenville, North Carolina, say they found Mirra around 4 p.m. sitting in his truck on Pinewood Road with an apparent self-inflicted gunshot wound.

“We have been able to determine Mirra’s own gun was used and all preliminary findings of the medical examiner on-scene point to suicide,” police said in a statement obtained by PEOPLE.

Mirra was visiting with his friends just before his death, Kristen Hunter, with the Greenville Police Department, tells PEOPLE. He left his friend’s home, sat in his truck and shot himself while still in the driveway, she says.

Hunter says that Mirra’s friends found him and called the police, she adds that a medical examiner on scene confirmed authorities’ belief that Mirra’s death was a suicide.

“Suicide is a personal matter and we intend to keep it that way,” police said in the statement. “It’s clear Dave struggled with internal demons – tragically, to the point where he chose to take his own life. It is our job now, not just as law enforcement, but as a community, to provide the support and resources necessary to help his family and friends get through this.”

And MTV said in a statement, “MTV sends their deepest condolences to his family and friends during this difficult time.”

Hours before his death, Mirra took to Instagram sharing throwback photos of himself in high school and paid tribute to his wife, Lauren Blackwell Mirra.

“My rock! Thank God,” he captioned a photo of himself alongside his wife.

Mirra is survived by his wife Lauren and two children. 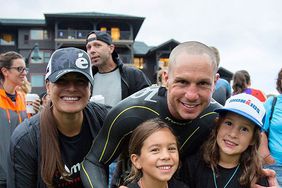