Fans call his turn in the Equus preview "terrific" and "amazing"

Some might even say it was a magical evening. Harry Potter actor Daniel Radcliffe appeared in his first preview performance of the Broadway drama Equus Friday, earning raves from fans.

“I thought that he was terrific,” Mandy Menaker, a college student who attended the performance at New York’s Broadhurst Theater, told PEOPLE. “He had a lot to offer. So I thought it was great.”

Danielle Manente from New Jersey agreed that Radcliffe was wonderful. “He was really good. He captured the character [and] he was so into it. He never broke character. I believed everything he said.”

In the revival of the 1973 Peter Shaffer play, which was also staged last year in London, Radcliffe stars as Alan Strang, a distressed and hostile teen who commits the horrifying act of blinding six horses, while a psychiatrist (played by Radcliffe’s Harry Potter costar Richard Griffiths) tries to get to the heart of why he did it.

Radcliffe first entered stage embracing an actor playing a horse. One of his first lines was singing an ad jingle, “Milky bar kid is tough and strong ” – a demonstration of the character’s hostility towards his psychiatrist.

His very emotional performance, which reveals Strang’s anger and fear, was met with enthusiastic applause from the audience. Not to mention wowing the crowd with the nude scene, which comes toward the end of Equus.

“Oh my God! That was nice,” said Manente of Radcliffe’s character fully undressed himself in an attempt at lovemaking with a young woman. “I’m not gonna lie. He looked pretty good.”

“By that point he was so in the character,” Menaker added, “that you don’t think of it as Harry Potter naked. He’s naked as a character emotionally, so you’re not at all thinking that he’s physically naked. You’re so involved in the scene by that point that you don’t even notice.”

Not one to disappoint, Radcliffe signed playbills for the mob of camera-wielding fans waiting outside the theater’s stage door. “It was really exciting to see him to do something so different,” said Harry Potter fan Alexa Haines after the show. “He was amazing.”

Opening night is scheduled for Sept. 25, and the production will play through Feb. 8, 2009. 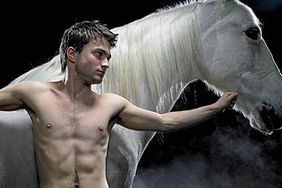 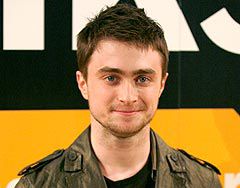 Daniel Radcliffe Talks about His Broadway Debut – and His Nude Scene