"I haven't really been at peace with myself lately," the Playboy model says

Hugh Hefner’s runaway bride says the decision to call off Saturday’s nuptials was a big relief.

“For a while, I’d been having second thoughts about everything, so I haven’t really been at peace with myself lately,” Harris, 25, told Ryan Seacrest Wednesday morning on his KIIS-FM radio show. “It was all just happening too fast for me.”

“I just sat back and thought about it all,” she continued. “Is this what I wanted? And it wasn’t.”

Harris says the Playboy chief – although heartbroken – took the news with tact.

“There was no fight,” explains July’s Playboy cover girl, prematurely identified as “Mrs. Crystal Hefner.” “He understood, and we both agreed that it wasn’t the best idea to get married. He was doing it for me because he thought it was what I wanted.”

Harris, who says she “wanted to be true to myself,” admits, “This isn’t the lifestyle for me.”

But don’t expect Hefner, 85, to find a replacement for his ex-fiancée.

“No, no,” Harris tells Seacrest when he asks if the mogul will ever tie the knot again. “He said he was just doing this wedding for me.”

As for now, Harris says she is “not seeing someone else,” but she is staying busy.

“[I’m] working on a whole album,” she says. “I sing and I write. I’ve been writing songs and I’ve been having so much fun with it all.” 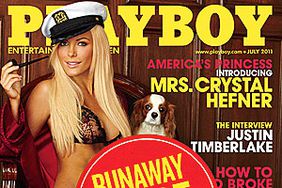