• Nick Lachey and Vanessa Minnillo, “locking lips, hands and eyes” when they weren’t cheering for the USC Trojans against Notre Dame at L.A.’s Memorial Coliseum. The couple, who were dressed head-to-toe in USC regalia, “couldn?t get enough of each other,? says a fan. During halftime, the new baseball-team owner and his lady chatted up the Trojans’ quarterback, John David Booty.

• Lindsay Lohan, having a serious discussion with ex-boyfriend Wilmer Valderrama at Hollywood Lounge Les Deux. Meanwhile, Nicky Hilton camped out in a corner table with her new squeeze, David Katzenberg, while her ex, Kevin Connolly, chatted up an attractive waitress nearby.

• Jon Bon Jovi and wife Dorothea Hurley, dining at hip New York City eatery Da Silvano with two of their kids. “They were enjoying their pasta dishes,” says a diner. “They looked like a big, happy family.”

• Flava Flav, telling us at at the American Music Awards that he and his Flavor of Love 2 pick Deelishis (real name: London Davis), are still seeing each other – but things haven’t heated up much since the show. “Everything’s all right. But I ain’t exclusive. Nah. Know what I’m saying? We plan on things getting better but we’ll see what happens.” One thing he does know: They won’t be spending the holidays together. “I’m gonna spend the holidays with my kids and my family. They wanna see me. I gotta get home.”

• Nicollette Sheridan and Michael Bolton, getting cozy in the lobby of the Hollywood Roosevelt Hotel before hopping aboard a float at the Hollywood Christmas Parade. ?They looked really happy together,? says an observer. ?Michael had his arms wrapped around Nicollette on the plush, brown leather couch.?

• Avril Lavigne and her husband of four months, Deryck Whibley, cuddling over turkey tacos at the Velvet Margarita Cantina in Hollywood. The affectionate pair sat in the corner, looking like they were still on their honeymoon. 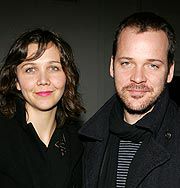