The Aussie sweethearts – and expectant parents – make it a family

night on the red carpet.

as they head into the theater.

Juno writer Diablo Cody, he made it a pairs night with his

her back. He even boasted, "She looks good, eh?"

– despite Alba admitting to being in her third trimester – but

their mutual affection was hardly a secret!

that he stepped on her Versace dress – more than once. At one point, she turned

to him and exclaimed, "You keep doing that!"

The Atonement star prefers to keep mum on his marriage, but his

affection was clear: The two managed to hold hands all the way down the red

Despite his gritty character in No Country for Old Men, the actor

strolled arm in arm down the red carpet.

They didn't do the Oscars red carpet together, but after the No Country for Old Men star won Best Supporting Actor, the Spanish couple weren't shy about celebrating at the Miramax party in Bar Marmont.

After presenting at the ceremony, Travolta takes on another role – escort, guiding his wife into the Governor's Ball to mix with other Hollywood royalty.

The British actress and her director husband look like the sexiest couple alive outside Prince's after-Oscar bash in Beverly Hills.

Inside the Oscar Afterparties! 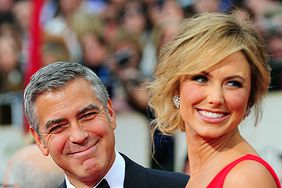