Couple Gets Married While Running the Chicago Marathon: 'I Got My Short and Sweet Ceremony,' Says the Bride

Both avid runners, Stephanie Reinhart and Mark Jockel tied the knot at Mile 8 of the famous race on Sunday

Stephanie Reinhart and her fiancé Mark Jockel couldn’t settle on what kind of wedding they wanted to throw.

Reinhart, 35, hoped for a quick and easy ceremony at City Hall, while the 46-year-old Jockel was looking forward to a big wedding with all their friends and family. So they compromised by getting married at Mile 8 of the Bank of America Chicago Marathon on Sunday.

“I got my short and sweet ceremony, and Mark got 40,000 guests,” Reinhart told The Chicago Tribune.

The couple met in 2013 while training for separate marathons – she was running Chicago, he the Marine Corps Marathon. They both joined the Chicago Area Running Association’s 8:00/mile pace group and hit it off immediately.

Jockel admits that at first he wasn’t so sure about tying the knot on the busy course. “It took me a day or two to come around to the idea,” he said. “But everyone I talked to about it was like, ‘That’s the most incredible thing I’ve ever heard. You’ve got to do it.’ ”

So they did, stopping just short of Mile 8 (to represent the pace group where they met, of course) and had a quick ceremony officiated by the bride’s best friend, NBC Chicago reports.

“We invited guests from all over,” Jockel said. “Washington state, Colorado, out east, and everybody made it. No one turned us down.”

They married under an arch decorated with race medals, toasting with Gatorade. The whole ceremony lasted no more than four minutes. “We wanted it to be short because we knew we’d want to take some photos and then we had 18 more miles to run,” Reinhart said.

And when they finished, race officials had a special treat for the newlyweds: bibs that read “Bride” and “Groom,” which they happily wore for pictures.

“The marathon reached out to us to say we should swing by the media center afterward,” Reinhart said. “And I figured it was either something really cool or it was an arrest warrant.” 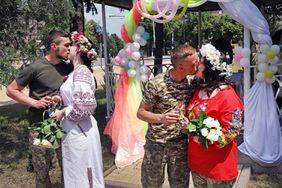