William H. Macy says tardiness by Lohan and other young stars is "inexcusable"

Macy, who shares a scene with Lohan, 20, in the upcoming Emilio Estevez-directed drama Bobby, called the actress a “huge talent,” but echoed the sentiments expressed in a letter sent to her recently by a studio chief who blasted her work ethic.

“I think what an actor has to realize (is that) when you show up an hour late, 150 people have been scrambling to cover for you,” Macy told reporters Thursday. “There is not an apology big enough in the world to have to make 150 people scramble. It’s nothing but disrespect. And Lindsay Lohan is not the only one. A lot of actors show up late as if they’re God’s gift to the film. It’s inexcusable, and they should have their asses kicked.”

When asked about Lohan’s work on Bobby, Macy paused and said, “She was pretty late.”

He added, “I worry about these young kids – 15, 18, 20 years old – who in the span of one year become millionaires and powerhouses. It’s too much power for a kid that age to handle.”

Macy, who has starred in films including Fargo and The Cooler, also defended his Magnolia costar Tom Cruise – recently bashed for his own behavior – as “not late.”

A rep for Lohan was not immediately available for comment. 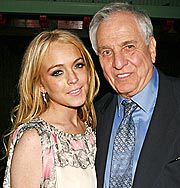