The man killed at the actor's home in August had a bad heart, the probe reveals

Ving Rhames’s caretaker died due to a bad heart, the Los Angeles Department of Coroner concluded after a five-month investigation into an August incident at the actor’s home.

Rhames’s “dogs didn’t kill Mr. Adams,” said coroner spokesman Ed Winter. “He died because of a preexisting heart problem. The dog bites found on him were determined to be non-fatal.”

The caretaker, Jacob Adams, 40, was found dead on the front lawn of the actor’s Brentwood home on Aug. 3. Rhames was filming a movie in Bulgaria at the time.

It was initially reported that the actor’s four dogs – three mastiffs and one bulldog – had bitten Adams to death.

However, on the day of the body’s discovery, Capt. Matt Blake of the LAPD told PEOPLE that although Adams was “definitely mauled” by the dogs, “there [was] no solid evidence that they were the cause of death.”

Two weeks later, Rhames released a statement, describing the incident as a “shocking and terrible tragedy.”

“Jacob Adams was not just a devoted employee – he was also a dear friend,” said the Mission: Impossible III star, 48. “I want to offer my heartfelt condolences to his family.”

Rhames’s dogs, which were initially quarantined by officials, have since been returned to the actor. 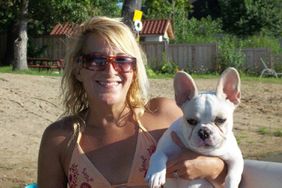 Chicago-Area Woman Is Mauled to Death by Her Adopted French Bulldog Mix: 'She Loved That Animal'