The actor's mother helped him to bed, then called 911 when he wouldn't respond

Corey Haim had been suffering from flu-like symptoms for several days before finally stumbling in front of his mother at her Los Angeles apartment early Wednesday morning, a coroner spokesman confirms.

“Some time after midnight, he got up, he was dizzy and unsteady on his feet and knelt down,” L.A. County Coroner Assistant Chief Ed Winter tells PEOPLE. “His mom helped him to a bed and he became unresponsive in about a minute or so. She dialed 911 and he was pronounced dead at a local hospital at 2:15 a.m.”

The death of the former ’80s heartthrob at age 38 has been ruled inconclusive pending an autopsy and toxicology test. But Winter says, “LAPD believes it was a possible drug overdose.”

Haim had been living with his mother as she battled cancer, Judy Haim tells RadarOnline. “I am a cancer victim and Corey was helping me at home, she said. “He was a good boy. I’m devastated by his death.”

A neighbor, Eric Jay, tells PEOPLE that Haim had been caring for his mother and was a regular fixture around the apartment complex. “It was a real shame. His mom was sick and he was taking care of her.”

Jay adds that Haim seemed to be on an upswing in life. “I saw him a few days ago with [his] mom by the pool,” he says. “He was humble but inspirational to the actors around here. He was getting himself together.”

Winter confirms that four prescription medication bottles were found in the home in Corey Haim’s name. Winter wouldn’t verify what drugs they were, though he says no illegal drugs were found.

Haim’s mother told investigators that her son “had problems with prescription meds and that he had been in rehab on and off over the years,” Winter says.
PHOTOS: Corey Haim: Remembering a Teen Idol 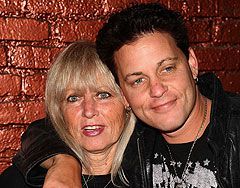