“They are ecstatic,” Nielsen’s rep, Joy Limanon, tells PEOPLE. The baby is due in the early summer.

This year, the Danish-born, New York-based Nielsen, 42, appeared as Detective Dani Beck on NBC’s Law & Order: Special Victims Unit. She costarred with Russell Crowe in 2000’s Gladiator and will next be seen playing a journalist in Iraq in the February drama The Situation.

She and Ulrich, also 42 and a Denmark native, have been dating for about two years.

Last year, Nielsen told PEOPLE that dating Ulrich hadn’t upped her rock credibility with her son. “He’s not impressed whatsoever,” she said. “It’d be better if (Lars) was a guy struggling to sell CDs out of a suitcase at Grand Central Station. But Metallica? Not impressed.” 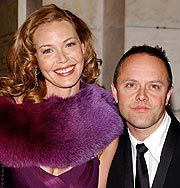