Stromchaser Kelly DeLay called the experience the "storm of a lifetime"

Mother Nature’s wrath took a shocking and stunning turn in Simla, Colorado, on June 4, unleashing a powerful thunderstorm over the small town.

Storm chaser and photographer Kelly DeLay followed the weather chaos, and captured a photo of the mighty supercell that appears to show the storm spawning two tornadoes at once, reports Mashable.

Weather reports from the day of the storm show four separate tornadoes originating from the massive cloud. DeLay was out chasing these twisters when he snapped the eerily majestic shot above. He later posted the photo to his Instagram, calling the experience “the storm of a lifetime.”

The photo shows what is possibly two tornadoes – or a tornado and a landspout funnel – springing from opposite sides of the supercell, a stark contrast to the bright sky that frames the storm.

Landspouts are smaller tornados created outside a storm’s mesocyclone – a supercell storm’s large area of rotation. These types of tornadoes are often weaker and can be found during less severe storms.

Additional reports from the storm show it is possible that the supercell produced two tornadoes at once, which would be a rare occurrence. 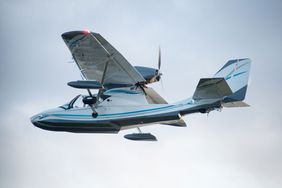