As a photo of late ABC anchor Peter Jennings was projected over the stage of New York’s Carnegie Hall, 2,000 people paid tribute to him at a memorial on Tuesday – remembering him as an intellectually curious journalist, a devoted father and a loyal Canadian who always carried a copy of the U.S. Constitution.

Alda recalled Jennings – who died of lung cancer on Aug. 7 at age 67 – as “complex and simple at the same time, knowledgeable and inquisitive, kind and tough at the same time, gracious and direct.” He never left a social engagement without Jennings giving him a book; the last was a copy of the Constitution, the actor said.

Ted Koppel, citing the time when they both joined ABC four decades ago, recalled how he was known as the smart one and Jennings the handsome one. Jennings kept his looks to the end but was also “very, very smart,” he said.

“From the time I first met Peter 41 years ago until our last meeting a few weeks ago, I felt a thrill whenever I saw him,” the Nightline host said. “Not that many people have that charisma, that kind of animal magnetism that makes it difficult to focus on anybody else in the room.”

Jennings, ABC’s chief news anchor for more than 20 years, was also “famously attracted to women,” Koppel said. “Even so, he only married four of them.”

Personal remembrances were interspersed with music – a gospel choir, violinist Natalie MacMaster, cellist Yo-Yo Ma, singer Alison Krauss and a jazz combo featuring Wynton Marsalis, as it was noted that Jennings was an insatiable jazz fan.

It was also mentioned that Jennings frequently served meals to the homeless after leaving the ABC News studio and that night’s broadcast of World News Tonight, according to Mary Brosnahan Sullivan of the Coalition for the Homeless. “The Peter I knew was somebody of concrete action,” she said. 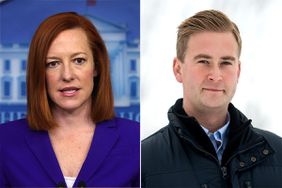