The woman who confronted Colin Farrell during a taping of The Tonight Show with Jay Leno in July apologized Monday – but insisted she’s no stalker.

During a hearing Monday in which judge John Reid upheld a restraining order against her until August 2009, Dessarae Bradford, 31, said, “Your honor, he’s trying to give the impression that I’m some stalker, some delusional fan, which is absolutely not true,” Court TV reports.

Reid responded: “But you are somebody who comes up from the audience, which is not allowed, during the live taping of a TV show, to confront him.”

“I might have been overzealous in trying to get this done,” Bradford said. “But I am by no means a Farrell stalker. I had no intention of getting that close to the stage and I apologize for that.”

Bradford claims Farrell reached out to her in 2004 after hearing about her self-published book about Alec Baldwin. “He basically just wanted to be book No. 2,” she said Monday. “He was chasing an adrenaline rush, possibly.”

Soon, Bradford said, Farrell began harassing her. She approached him on The Tonight Show on July 20, she said, in an effort to create a diversion so that her private investigator could serve him with legal papers.

The next day, Farrell requested a temporary restraining order, saying in court documents that he feared for the safety of himself, ex-girlfriend Kim Bordenave and their son James.

Farrell, 30, did not appear in court Monday. His lawyer, Jeffery McFarland, declined to comment on Bradford. “When she speaks, it speaks for itself,” he said. 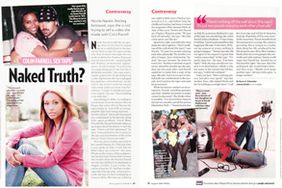