Taking a break from the music festival, the stars got pampered and partied at private parties throughout the weekend

For those suffering from Coachella withdrawals after an epic weekend, worry not – the biggest celebs in Hollywood are probably feeling the exact same way. On Friday, the stars started flooding into the Palm Springs area for the annual music festival, which culminated in an epic performance by Calvin Harris (with a surprise appearance by Rihanna!). But it’s not all just about the music – stars like Katy Perry, Leonardo DiCaprio, Kristen Stewart and more hit up private parties to get in some pampering and pick up some swag.

Starting off the weekend with a bang, Kendall Jenner, Kylie Jenner and Scott Disick had a friendly reunion on Friday at 1OAK’s pop-up party, sponsored by Bumble and Casamigos. Taking a breather from the heat, model Suki Waterhouse hosted the Style Code Live Soiree at The Korakia, where Jared Leto popped by to pick up an Amazon Tap speaker and Stewart was spotted indulging in a Caudalie spa treatment and hanging out by the pool with some friends, including Soko. The Twilight actress also supported the DJ while she spun at the Nylon Midnight Garden bash later that night, where guests dug into Umami Burger and sipped on cocktail in the secret Freeform “Dead of Summer” vintage school bus bar. Making a stealth appearance at the Calvin Klein bash, Kanye West hung out backstage with pals while Alesso played a set.

After hosting Popsugar’s Sunset Kickoff party Friday evening, Emily Ratajkowski and her boyfriend Jeff Magid popped by the #CHILLCHELLA Brunch with Dannijo, Same Swim and Diane Von Furstenberg on Saturday where Bai beverages were served. The actress – who flew in with style on Absolut Elyx’s “Copper Chopper” – “were cute as ever,” says a source, who adds that first-time festival goer Olivia Culpo picked up tips from her gal pal Cara Santana while guests snacked on cupcakes, waffles and cookie dough jars. Around the corner, Ashley Greene was the first to arrive at The Zoe Report + Guess’s retreat, where she got hair touchups at the Batiste Dry Shampoo braid bar. The actress also partied at the Bootsy Bellows estate, where The Weeknd and girlfriend Bella Hadid showed off PDA and the Jenner sisters were seen snacking on McDonald’s All Day Breakfast sandwiches.

Over at The Music Lounge presented by Las Vegas, where the “What Happens Here, Stays Here” beer was launched, G-Eazy had a friendly run-in with Amber Rose (the two even matched in black and white attire!). “She was congratulating him on all his success,” says an onlooker. At the second day of the lounge (sponsored by V-MODA), Joe Jonas played a DJ set with his band DNCE (they also performed earlier in the weekend at Republic Records’ Coachella house) and chatted with Vampire Diaries star Kat Graham, while Walk the Moon deejayed at the Cree Estate in Catherdral City to more than 600 Pandora fans. At the Heineken House, Zoe Kravitz ran over for a quick hug and chat with close friend Jaden Smith. “My boo is calling me!” the actress was overheard screaming when she got a call from her boyfriend George Lewis Jr. Coachella queen Vanessa Hudgens caught up with Tyler Posey (a festival first-timer) at Forever 21’s #F21MUSIC private party.

Before hanging with Rihanna late Saturday night at Neon Carnival (sponsored by Levi’s, Re/Done and Tequila Don Julio), DiCaprio arrived solo to the Wildfox pool party at 117Live and theAudience Social Club, where he stayed incognito in a red polka-dot shirt and blue shorts. Kylie Jenner’s boyfriend Tyga was also spotted at the event the day before tucked away in a private room.

After swapping kisses and dancing at the festival during the day, new couple Katy Perry and Orlando Bloom made their way to Jeremy Scott’s private after party, where the singer also hung out with close pal Mia Moretti.

And on the last day of the festival, Tyga and Kylie showed off some PDA at the REVOLVE Desert House, where stars like Peyton List (who also stopped by Smashbox and Rebecca Minkoff’s luncheon), Shay Mitchell and Kiernan Shipka snapped photos in the Project September 3D photo experience and picked up products at the Birchbox Beauty Bar. Kendall was also spotted keeping cool with a Bai popsicle and later showed off her fit bod in a skimpy reversible Mary Grace bikini.

Arriving at 2:30 p.m., “Tyga and Kylie were seen snuggling in a cabana by the pool.” says a source. DiCaprio also made an appearance at the bash – sponsored by Joico Instatint and Birchbox – with a huge entourage to take in a surprise set by Travis Scott and Pusha T. And later in the night, Jaden Smith and his girlfriend Sarah Snyder were seen “kissing and canoodling” while tucking into dinner at an Outstanding in the Field dinner. 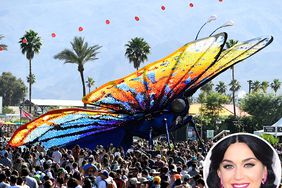 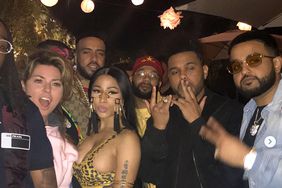 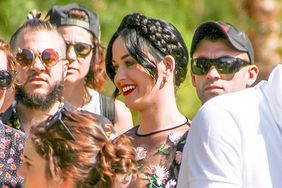 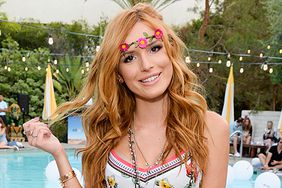 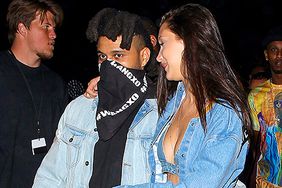