The actor says he has an "extraordinarily amicable relationship" with his ex, Ryan Haddon

His divorce from estranged wife Ryan Haddon having been finalized earlier this week, Christian Slater tells PEOPLE he’s not doing anything to mark his renewed single status.

“It’s not really a celebratory thing,” says the actor, “but I am grateful that it has been resolved in the way that it has, and I have an extraordinarily amicable relationship.

Slater, 37, and Haddon, 35, a TV producer, married in 2000 and separated in January 2005. Slater had been seeking joint custody of their 5-year-old daughter Eliana and 7-year-old son Jaden, but it’s unclear how that issue was resolved.

As for his holiday plans, for Christmas “I’m going to Toronto with my kids to say hello to their great grandparents. A little family holiday,” says Slater.

When it comes to New Year’s resolutions, the actor adds, “I’m really great right now, I have nothing to resolve. I want for nothing, I’m pretty happy in every possible way.”

Finally, what about the buzz that he’s been seeing Sharon Stone? “No, not really,” he answers, “but I’ve been having fun with those rumors.” 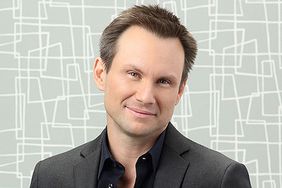 Christian Slater Opens Up About Reconnecting with His 'Manic-Depressive' Father: 'We Were Able to Begin to Build a Better Bridge for the Both of Us'

Christian Slater Grows Up For His Kids

Christian Slater: 'Having Kids Is a Phenomenal Eye-Opener' 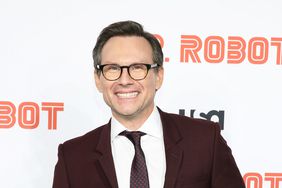