He won moviegoers’ hearts as Kristen Wiig’s love interest in Bridesmaids. And now, Chris O’Dowd has a beautiful bride of his own.

The Irish actor and current Girls guest star, 32, got married Aug. 26 to the British TV presenter Dawn Porter in a three-day party that culminated with a low-key backyard exchange of vows.

“Just married!!!!” O’Dowd Tweeted after the ceremony, along with a photo of himself and Porter, 33, sporting matching full-body sweatsuits.

The couple met at Porter’s 30th birthday party in Los Angeles in 2009, and got engaged the day after Christmas last year in Guernsey, an island in the England Channel where Porter grew up.

The sweatshirt photo wasn’t the only one O’Dowd showed off after the wedding. He also posted a racier snapshot of his new wife in lingerie and a fur-trimmed robe, with the message, “There are times for restraint and there are times to boast about your sexy new wife! LOOK WHAT I GOT!!!”

Porter didn’t seem too pleased, though, and the photo has since been deleted. “That wasn’t the wedding photo I was planning to release. #husbands!!!!” she wrote on Twitter. 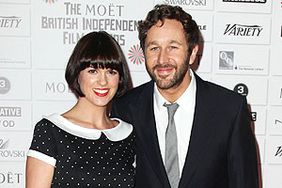