The actress wore a timepiece by Dior when she had a deal with another company, a suit says

According to a new lawsuit, Charlize Theron doesn’t know what time it is.

Swiss watchmaker Raymond Weil is suing the actress for wearing a Christian Dior timepiece when she was supposed to wear only Weil watches, the Associated Press reports.

According to court papers filed Monday, Theron, 31, was paid “substantial funds” to model in the company’s ad campaign and wear its watches exclusively from October 2005 to December 2006.

Meanwhile, she was also the face of a Dior perfume, and “was actually photographed wearing a watch from the Christian Dior line” at a press event in Austin, Texas, on March 14, 2006, the suit claims. (A photo of Theron wearing the offending watch is included as an exhibit.)

To add insult to injury, she also “appeared wearing a necklace in an advertisement benefiting an AIDS charity,” the court papers say. “Plaintiffs were led to believe and had a right to believe by their written agreement that (Theron) would not promote jewelry or watches.”

The actress’s rep did not return calls for comment from the AP.

Theron isn’t the first celeb to face a lawsuit over wearing the wrong brand: In April, Jessica Simpson was sued for $100 million by Tarrant Apparel Group for not wearing the namesake brands – including Jessica Simpson, JS by Jessica and Princy – it had developed with her.

According to court papers posted on The Smoking Gun, the company was also incensed that when Simpson was asked by a reporter to name her favorite brand of jeans, “instead of responding ‘Princy,’ she said ‘True Religion.’ ” 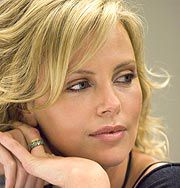 Britney: If the Lawsuit Fits, Wear It