The actor, who is back to work, seems unfazed by his divorce filing and recent hospitalization

You’d never know Charlie Sheen had come off such a tumultuous week.

Just a week after being hospitalized for what a police source calls “alcohol abuse and psychological evaluation,” and less than 24 hours after filing for divorce from Brooke Mueller, the actor was “all business as usual” on the Two and a Half Men set on Tuesday.

“The [hotel] incident seems like a non-issue and nothing has changed on the set,” a source on the hit CBS sitcom tells PEOPLE. “He received a really warm welcome, and now it’s all business as usual.”

Charlie Sheen Returns to Two and a Half Men Set

But that’s not to say that Sheen, 45, isn’t taking his latest personal drama to heart. “Charlie is taking his sobriety seriously,” says a Sheen friend. “He is taking it one day at a time. He’s sober, back at work and moving forward.”

In fact, the star is leaning on a “sober coach” for spiritual guidance and ongoing support for his longstanding addiction issues.

Perhaps the biggest winner in the wake of Sheen’s latest drama? CBS.

Two and a Half Men enjoyed a hefty ratings boost for Monday’s show, pulling in 13.6 million viewers.

Charlie Sheen Returns to 'Two and a Half Men' Set

Charlie Sheen Will Be Back to Work as Usual

Charlie Sheen Gets Back to Work

Sources: Charlie Sheen Leaving 'Two and a Half Men' 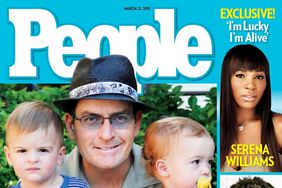