Charlie Sheen and Denise Richards’ status as a married couple is over, and they are now legally able to wed other people, according to legal documents obtained by PEOPLE.

However, the couple’s divorce is not yet complete: Still at issue is the final division of assets and custody arrangements over their two daughters, Lola, 1, and Sam, 2.

The couple wed in June 2002. Richards, 35, originally filed for divorce from Sheen, 41, in March 2005, when she was six months pregnant with their second child.

Earlier this month, Sheen said he’s glad that Richards is with Sambora. “To know that it’s somebody decent and smart and a good parent to be around your children, that’s a good thing,” he told Ellen DeGeneres on her daytime talk show.

“Denise wants her to feel comfortable,” a Richards pal told PEOPLE last month. “She put together a bag with toys for her and the girls (Lola and Sam) along with a card telling her she’s glad (Brooke) makes their father so happy.” 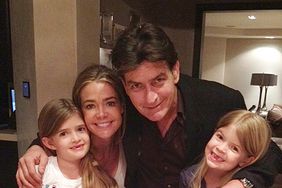