These stars survived that sacred rite of passage of sharing housing with potential — or in some cases, proven — weirdos

The Life of the Party star knew she and her college freshman year roommate were a mix-matched pair from the start. "I was very punk at the time. I looked like Siouxsie Sioux and Robert Smith had a baby," she shared on Jimmy Kimmel Live. "I walked in [the dorm room] and there was a girl with like black hair, and I think a Clash T-shirt and like black high-tops. I was like, 'What are the odds that two of us are in one room?! We won't be made fun of!' And then her sister came out of the bathroom, slaps up a White Snake poster and goes, 'Are you her?'"

McCarthy's disappointment didn't end with getting paired with the wrong sister. Soon, her hair band-loving roommate was bringing up John Wayne Gacy, who was convicted of murdering 33 young men in the '70s.

"And then her big ice breaker as we're sitting there — because it's so weird, you're now going to sleep next to a stranger — and her big ice breaker was, 'Hey, you know I live right down the street from Gacy,'" she recalled. "'Yeah, John Wayne Gacy, I used to walk by the house.' And I guess that was supposed to be like, 'We'll be friends forever!'"

The Love, Simon star currently shares a place with one of his friends. "This is my first roommate ever, so it's been a bit of a learning curve trying to sort of learn the ropes a bit," he said on Jimmy Kimmel Live.

"We do share a bathroom — that's actually been the worst part of all of it," Robinson continued. "He's got a large beard, it goes down to like [his stomach] or something. So every morning when I'm waking up and doing my routine I have to just dig this huge lump of hair out of the drain… It's really gross."

Plaza did her best to explain her baffling former living situation on The Late Late Show with James Corden. "I was living in Ghana for two months when I was in college doing a documentary film program and my roommate was a straight-up pirate. Like a literal pirate," she said.

"Her name was Jenny — I think. And she had blonde hair. She was like a transfer student, but she was like straight off a boat off the Caribbean," the actress continued. "She went [to the school] because she thought she was going to like party and you know, get tan, and find like booty. I don't know how else to explain it to you. She was always looking for treasure and she was always drunk."

"He was a really weird guy," the Silicon Valley star told Seth Meyers about his freshman year roommate. "The first time I met him, one of the first things he said to me was, 'Hey man, you ever dream of being locked up in a Swedish women's prison?' And I was like, 'No, I haven't.' And then — no joke — he was like, 'You ever dream that you can kill people with just your eyes?' And I was like, 'No, and now I'm going to sleep with a small baseball bat by my bed.'"

Luckily, the first impression the student gave off wasn't emblematic of his personality. "But he turned out to be a really nice guy, just spectacularly bad with ice breakers," Woods added.

During a 2015 Tonight Show appearance, Robbie spilled details about sharing a house with five of her friends.

"I live with three boys, and I can't tell you how hard it is to get your hand on toilet paper," she told host Jimmy Fallon. "They steal it! We've got a girls' bathroom and a boys' bathroom, fortunately, but they sneak on up and steal all our toilet paper."

"I once had a roommate that used to sleep [with] his sheets so tight that I don't know how he fit in the bed. He somehow slithered into the bed. His feet couldn't even stick up, it was just tight. And then [his arms would be crossed] like he was a vampire or something," The Tonight Show host said while introducing a #WeirdRoommate segment. "I never saw him get in or get out. Maybe he had friends help tuck him in — I don't know what went down"

Long and fellow actor Jonah Hill lived together way back in the day, but had to part ways when they couldn't stop fighting "like an old married couple."

"We fought over recycling," Long said in 2009. "He would recycle everything. I would find banana peels and shards of glass in the recycling bin. We started getting in little fights like that, he left the bathroom door open, didn't clean up after himself. Little things like that. It was time for a separation."

The Orange is the New Black star and her best friend once shared a "bitchen," a small apartment in which their one bed and kitchen were in the same room. During a visit to Late Night with Seth Meyers, she shared the legalese-filled contract he had written up to control their time together.

The agreement included rules like, "Both parties must treat the other with courtesy and respect regardless of their state of inebriation, exhaustion or general non-collaborative mood."

"I was 18 and I was being dropped off for college in New York," the Supergirl star said about moving away from home for the first time on The Late Late Show. "Most kids are excited to leave the house, [but] my mom and I kind of had this sobbing saga on the corner of like 55th and 2nd avenue. Like, legitimately wailing together. And I went up to my dorm room and my roommate was really weirded out and we didn't talk for awhile." 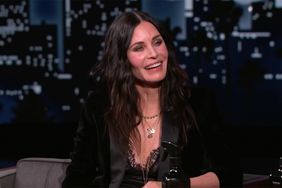