In June, Gossip Girl's resident golden boy Chace Crawford was arrested outside a Plano, Texas, pub after police discovered pot in the car he was riding in. Crawford, who played a drug dealer in Twelve, was charged with misdemeanor possession of marijuana.

Apparently Jessica Simpson's love is a drug – at least for Mayer, who compared his ex to in a now-infamous interview with Playboy for its March issue. Although he later apologized for his "arrogance," Simpson declared, "He'll never have this napalm again."

Despite bad-mouthing her family and stripping for Playgirl, Levi Johnston proved irresistible to his ex, Bristol Palin, who announced their second engagement in July. But weeks after their reunion, Palin was ready to move on solo amid rumors Johnston fathered a baby with another teen. "He's just obsessed with the limelight and I got played," she told PEOPLE, before sashaying onto Dancing with the Stars.

Real Housewives of New Jersey star Teresa Giudice allegedly went on a $60,000 shopping spree immediately after claiming to be nearly $11 million in debt and filing for bankruptcy with her husband, Joe. Defending her purchases, Giudice's lawyer claimed she lawfully spent money she earned post-bankruptcy on items for her mansion, after her belongings were seized for a forthcoming auction.

Don't be fooled by the rocks that Naomi Campbell's got. After the supermodel testified that she didn't know stones given to her in 1997 were linked to former Liberian president Charles Taylor at his UN war-crimes trial, Mia Farrow shot down Campbell's story. The actress said the beauty boasted about the "blood diamonds" at a charity event both women attended.

Talk about courting disaster! During a tearful day in court last July, Lindsay Lohan had "F--- U" stenciled in nail polish on her left middle finger. Lohan, who claimed the profane manicure was "a joke," spent 13 days in jail and 23 days in court-ordered rehab for violating probation in a DUI case.

Hell hath no fury like a Hollywood wife scorned! In April, former NYPD Blue star Garcelle Beauvais publicly aired her husband Michael Nilon's dirty laundry to his Creative Artists Agency colleagues in an angry, company-wide e-mail. "I found out today that MY husband of almost 9 yrs has been having an affair for 5 yrs with some slut in Chicago," she wrote. "I am devastated!!! And I have been duped!!" A month later, the mom of two filed for divorce.

In May, a British tabloid captured the Duchess of York on video accepting a $40,000 cash payment – and an additional $700,000 to be wired later – in exchange for access to her ex-husband Prince Andrew. "I was in the gutter at that moment," the cash-strapped Sarah Ferguson told Oprah Winfrey in a candid interview last May. "So I'm aware of the fact that I've been drinking, you know, that I was not in my right place."

John Edwards's former mistress Rielle Hunter finally broke her years-long silence in a GQ interview that gave the 45-year-old videographer more exposure than she bargained for. Posing in just a white button-down among her 2-year-old's toys, Hunter – whose affair with the former presidential candidate led to the end of his 32-year marriage – later found herself crying over her "repulsive" photo spread.

After a July arrest for public intoxication, Jersey Shore star Nicole "Snooki" Polizzi pleaded guilty to being criminally annoying in Seaside Heights, N.J., resulting in a $500 fine and community service by a judge who called her a "I had too many tequilas," Snooki said. "What are you gonna do?"

A raspy-voiced Whitney Houston painfully oohed and ahhhed her way through a U.K. comeback tour that ultimately left fans disappointed. The excuse? A divalicious voice with a mind of its own. "I wanna do it – but [my voice] just doesn't want to," Houston said during a sold-out concert in London, where she failed to hit the high notes of her megahit "I Will Always Love You." "I have long talks with her. Well, tonight she's getting a little temperamental."

A former mistress's extortion threats prompted Bones star David Boreanaz to come clean about his infidelity in May. "I haven't been faithful to my wife," the actor – who was linked to Tiger Woods's hookup Rachel Uchitel – admitted to PEOPLE. "Our marriage has been tainted with my infidelities. I was irresponsible."

WAR OF THE ROSES

After Bachelor Jake Pavelka dumped his bride-to-be Vienna Girardi over the phone in June, the Florida fitness consultant took their breakup to the tabloids. The bitter exes then duked it out during a Bachelor special, where Pavelka blamed their downfall on Girardi's jealousy over his acting career. "You are a fame whore is what you are," she tearfully rebutted.

Lady Gaga proved she's anything but a lady when she stripped down to her underwear and flipped the bird during a Mets-Padres game at New York's Citi Field in June. Adding insult to injury, Gaga was then upgraded to a luxury box owned by famous Mets fan Jerry Seinfeld, who later called her "a jerk." 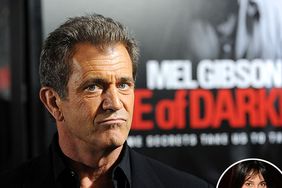