From politicians to Academy Award-winning actresses, the Girl Scouts have a history of some pretty awesome alumnae

Kristen's favorite thing about being a Girl Scout (other than the cookies, apparently)? That they created a limited-edition patch with her called "Paint Your World Purple" that recognizes Girl Scouts working to make the world better, inspired by the message in her book The World Needs More Purple People.

"I bet you can guess who sold the most cookies for Troop 1007," Witherspoon bragged on Instagram alongside a throwback photo of her in her adorable uniform.
The cookies just went on sale, so if you're craving Thin Mints (or this year's new flavor!) you can support a Scout by purchasing a box or four.

Couric took a walk down memory lane in 2012, sharing a photo of her in her Girl Scout uniform in 4th grade.

Breslin was sworn into the Girl Scouts on the 20th Century Fox studio lot in 2008, just one year after being nominated for Best Supporting Actress at the Oscars. Do you think that earned her a badge?!

The former first lady and former secretary of state Hillary Clinton wrote of her time as a Girl Scout in her 2003 memoir Living History, sharing, "As a Brownie and then a Girl Scout, I participated in Fourth of July Parades, food drives, cookie sales and every other activity that would earn a merit badge or adult approval."

Laura Bush helped the Girl Scouts celebrate their 90th anniversary while First Lady of the United States, and was named Honorary National President of Girls Scouts.

As honorary national president of the Girl Scouts 2015, Michelle Obama invited 50 Girl Scouts to camp out on the White House lawn!

According to the Girl Scouts of America, before Mariah Carey was a superstar, she was a Scout!

Actress Debbie Reynolds was a proud Girl Scout! The organization paid tribute to her and her daughter Carrie Fisher following their deaths in Dec. 2016, sharing that Reynolds "earned more than 42 badges and even joked that she wanted to become the world's oldest living Girl Scout." Reynolds was even the troop leader of her daughter ...

...who followed in her mom's footsteps as a Girl Scout!

Actress Blythe Danner once took the vow to "always be prepared," and she passed down her love of the Girl Scouts to her daughter ...

...and the Goop founder is listed on the organization's website as a famous Girl Scout alum.

That's right, the Duchess of Sussex is a Girl Scout! According to the organization's blog, Prince Harry is lucky to be married to her because of her Scout values.

The model and Kode with Klossy founder was also a Girl Scout! She told Teen Vogue in 2013, "I have so many fond memories of growing up with my sisters and my best friends, and selling cookies was such a big part of our year. That was the exciting part of the spring. You plan for it all year. It's such an incredible memory that I'll always have. My oldest sister is just a few years older, and my youngest sisters are twins, so all of us were in Girl Scouts at the same time. I was in my troop with my absolute best friends growing up. In my community, the Girl Scout troops were very close. It was amazing to be a part of something that was big—it was very special organization. It still is!"

The former Girl Scout even recorded a PSA for the organization, saying in her recording, "Not just making our mark but making a difference. Now that's a job for a Girl Scout."

The High School Musical alum became an honorary Girl Scout at the 2009 premiere of her movie Bandslam.

The former Girl Scout (she was given the organization's Gold Award) showed her support for the organization in 2020 as they moved their cookie selling virtual. Banks tweeted, "Support our nation's youngest female entrepreneurs while social distancing!"

Robin Roberts tweeted in 2017, "I was a #GirlScout and I'm proud to say I'm a lifetime member!"

The legendary journalist was once a Girl Scout!

Swift may have grown out of her Girl Scout uniform, but she still looks after her fellow Scouts — in 2018 she gave Girl Scout troops in Northern New Jersey hundreds of free tickets to her reputation tour.

Is it any wonder that Martha Stewart is a Girl Scout? She shared, "Girl scout camp at South Mountain Retreat (in Orange, N.J.) taught me the real love of the outdoors, camaraderie and friendship."

The journalist, who was a Girl Scout in Southwest Indiana, said, "the Girl Scouts is where I became acquainted with the idea that a woman can do anything."

The Girl Scouts organization honored Ball, one of their notable alumnae, during Women's History Month in 2017.

The New York Representative was once a Girl Scout! She once tweeted, "@girlscouts is how I first practiced how to change brake fluid, start a fire, practice self-defense, recreate the NASA Challenger mission, and v importantly: learn to teach myself new skills + navigate ambiguity. There's a reason a large of Congresswomen are former scouts!"

Fun fact: Every female secretary of state in United States history was a Girl Scout! Rice told a group of Girl Scouts in 2008, "The most important qualities in being a leader are to have a strong sense of values and integrity, that whatever you're doing, you're doing it because you believe it's right, to not just try to do the easy thing. If everybody just did the easy thing, nothing would ever progress." 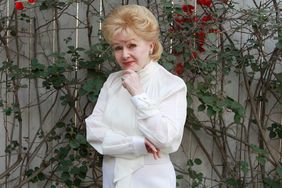 Inside Debbie Reynolds' Final PEOPLE Interview as She Looked Back on Her Career, Success and Scandals