These stars have fame and brains

How serious is the grown-ish star about her Harvard studies? For the 2021 Emmys in L.A., she requested to present a trophy early in the night so she could catch a flight back to Boston to make it in time for her Monday classes.

The daughter of Kimora Lee and Russell Simmons scored a Harvard admission at only 16, and still finds time to model in the midst of her studies. In November, she shared a look at her "girly, fun" Harvard dorm room, decked out with the help of Pottery Barn Teen.

The Wizards of Waverly Place star is now a wizard in the classroom: She's pursuing a joint JD/PhD program between Harvard and the Massachusetts Institute of Technology.

One of Hollywood's most famous college grads, Shields attended Princeton University — where she was hounded by the paparazzi.

Another star who famously took a break from acting to get a degree, Foster graduated from Yale in 1985.

The black-ish star graduated from Brown University, and returned in 2015 to receive an honorary doctorate degree.

You'd think Legend (as a student, known by his birth name John Stephens) would have studied music in college, right? Nope. As a student at the University of Pennsylvania, he majored in English. He got his music fix as a member of an a cappella group.

The actress graduated from Columbia University, where her brother Jake also went, though he left after two years.

Jones graduated from Harvard in 1997, and returned in 2016 to address the graduating class.

Returning to her alma mater Brown University in 2012, the 1991 grad praised her professors and joked that she "did everything all students have ever done."

The actress received both her BA and MFA from Yale, and returned in 2018 to pick up an honorary doctorate degree.

In a 2002 interview with the Harvard Crimson, the actress talked about her decision to stay in school instead of leaving to pursue an acting career.

"I'm so glad that I went back and finished my education, because I had the best time at Harvard," she said. "It was the best four years of my life, it was just fantastic. When I came back, I rowed crew, I directed a play and I kept singing with the Veritones."

The same year that Star Wars: The Phantom Menace was released and Portman shot to fame, she enrolled at Harvard University, despite critics saying it would be a career setback. "I'd rather be smart than a movie star," she said. Of course, her time at Harvard, which finished up in 2003, didn't ruin her career — quite the opposite.

The Office star enrolled at Brown after a gap year spent in Costa Rica, teaching English as a second language and studying theater upon arriving. He also was a member of Out of Bounds, a sketch comedy group.

The Office cast sure knew how to pick them! In 2018, 2001 Dartmouth grad Kaling returned to give a hilarious acceptance speech.

In the midst of her teen popularity, Stiles opted to study English at Columbia. "College will help me as an actress, because it makes me more interesting," she told Rolling Stone at the time.

The queen of TV, an English literature with creative writing major, graduated from Dartmouth in 1991, and returned in 2014 to give an inspiring commencement speech that focused on achieving work dreams, using platforms for good and what "having it all" really means.

Watson, who attended Brown University, did not have your typical college experience. First, she had to delay starting her college career to film Harry Potter and the Deathly Hallows. She also did a year-long "study abroad" (although for her, it was really more "study at home") at Worcester College at Oxford University. She ended up taking five years to finish because she took two semesters off for acting jobs. She graduated from Brown with a degree in English in 2014.

Before she was charming audiences in Friday Night Lights and Nashville, Britton attended Dartmouth College, where she majored in Asian studies, concentrating in Chinese. That concentration led her to pursue a study abroad opportunity in Beijing, where she was roommates with none other than U.S. Senator Kristin Gillibrand.

Before she was one of the Girls, Williams — who is the daughter of MSNBC anchor Brian Williams — attended Yale University, where she was a member of Just Add Water, an improv comedy group. She graduated in 2010 — and months later, landed the part of Marnie on Girls. Not exactly your average entry-level job!

Before she was a bankable Hollywood star (get it?) Banks was a student at the University of Pennsylvania, where she majored in communications and minored in theater. She was also a member of Delta Delta Delta sorority.

Kemper graduated from Princeton in 2002 with a degree in English. She started off her Ivy League career playing field hockey for the school, though she didn't get much time actually on the field. "I sat on the bench for roughly 97 percent of my field hockey career at Princeton," she told the Princeton Alumni Weekly. She then left the team in order to commit more time to comedy and improv. 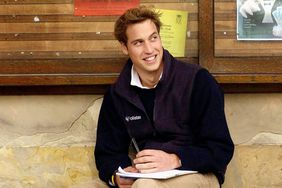 University Challenge: Do You Know Where These Royals Received Their World-Class Education?