From Kim Kardashian to Bradley Cooper, these stars prove that you're never too old or famous to live at home with Mom and Dad

Oliver told E!'s Daily Pop in January 2022 that he, wife Erinn and their three kids — Rio Laura, 8, Bodhi Hawn, 11, and Wilder Brooks, 14 — have moved in with his parents Goldie Hawn and Kurt Russell temporarily as their house undergoes a remodel.

"Your mother cooks you breakfast in the morning?" replied Colbert, impressed.

Although the star lives on his own, Foxx revealed that his mom and dad, who happen to be divorced, moved in with him. He broke down the unique circumstance during his appearance on the Graham Norton Show in January 2020 by explaining that his father was put in jail for seven years after being caught in possession of a small amount of illegal substances, according to US Weekly.

"This man was an educator of kids in the inner city and he taught me everything I know," Fox said, as he started to get emotional.

"I couldn't visit him in jail because I saw him as a king," he continued. "But I wrote to him to say, 'Things have gotten good for me and when you get out I will save your life,' and he has been living with me for 20 years now."

Then Foxx went on to share that he would always send his mother a ticket to come and visit him and "about 12 years ago, she took me up on the offer and she came for Christmas."

He continued: "New Year's came and went, then her birthday in January and then all of a sudden it was February and she hadn't left."

Even though his parents split more than 25 years ago, according to Us Weekly, their living arrangement has worked out just fine.

"They live under the same roof and what's crazy is that he still dates, and my mother will go to his side of the house to check things out!" Foxx joked. "It's a weirdly fun household."

The Bachelor's Pilot Pete still lives at home, but after his mother explained why on the Bachelor Party podcast with Rachel Lindsay and Becca Kufrin, fans will understand that his decision makes a lot of sense.

"First of all, we are a very, very close family. Very close... We're basically one," Pete's mom Barbara began. "We support each other in every which way, and we're each other's best friends, not just parents. We're everything to each other."

She contined: "People forget: I'm Cuban, OK... In old time Cuba, the kids would be at home and in their 20s they would get married, and they would still live at home. They would have children, and the grandparents...it was one big happy family. Everybody living at home, so contrary to what a lot of people say like, can't wait to get rid of the kids...our culture is a little bit different, and not that one is right and one is wrong, we want to keep that family tie, that unity together."

On top of that, Barbara explained that Pete's job as a pilot keeps him away for days at a time so financially, it wouldn't make much sense to pay rent for his own place when he can save his money.

"He can buy a house tomorrow if he wanted it," she said. "Responsibly, he can do it, but I'm just looking for the right place for him when we do decide that he's going to take that step...but we're very happy living at home, everybody together."

For two years, the Black Panther star lived in a Sherman Oaks mansion with his parents and younger brother, Khalid. The actor bought the property in 2016 to help take care of his mom, who has lupus, but announced in 2018 that he would be moving out. He now lives in a penthouse in downtown Los Angeles. According to an interview with Vanity Fair, Jordan's mom is already worried about her son being out on his own.

Not once but twice did the beauty mogul decide to move back in with momager Kris Jenner. In 2015, Kim, husband Kanye and daughter North, who was 2 at the time, moved into Jenner's Calabasas home while they were renovating their $11 million home in Bel Air — which they never even got to live in.

Kim and Kanye previously lived with Jenner in 2013 for more than one year for the same reason and eventually moved out once they settled into their $20 million estate in Hidden Hills. The kicker? They were just down the street from Jenner.

The Minnesota Vikings quarterback, who signed a $84 million contract with the team, chooses to live in his parents' basement during the summer in his hometown of Holland, Michigan. It wasn't a bad idea to live rent-free while Cousins built his new home on Lake Michigan, which is reported to have five bedrooms and two fireplaces. The quarterback was able to move in the summer of 2018.

In a 2016 interview on The Ellen DeGeneres Show, the Spider-man: Homecoming actress said living at home with her mom and dad not only saved her on rent and rides, she also had a protective barrier from the negativity that comes with being a child star.

While it's not that unusual for a 20-year-old to live at home, it is pretty amazing that a year later, Zendaya purchased her own $1.4 million home in Los Angeles (around the same time her mom filed for divorce from her father). The home has five bedrooms, five bathrooms, a swimming pool and spa.

The youngest of five kids, Griffin lived with her parents until she was 28. Thankfully, the self-proclaimed "D-List" star made it big in Hollywood and was able to purchase her "f-ck you house" that cost her $10.5 million, which she paid in cash.

The 13,000 sq.-ft. mansion has nine bedrooms, 12 bathrooms, an elevator, movie theater, infinity pool and used to be next door to Kim Kardashian and Kanye West.

At 35, Menounos revealed on Ellen that she was living with her parents and long-term boyfriend (now husband) Keven Undergaro under one roof in Los Angeles. But coming from a traditional Greek family, Menounos wasn't doing anything out of the ordinary.

The family's living situation came in handy when the former E! News host had brain surgery to remove a tumor, her mother got diagnosed with brain cancer, her younger brother, Peter, suffered injuries from a car accident, and her father got very sick a week before her wedding. (Sadly, her mother passed away in 2021.)

In 2016, the Hunger Games actress' parents sold their Santa Monica townhouse for $1.15 million — the same property they bought in 2006 when they moved a 16-year-old Lawrence from Kentucky so she could pursue an acting career. Then in 2014, Lawrence left the nest and bought a house in Beverly Crest, California, for $8.225 million. The French-style home was previously owned by Jessica Simpson. Now, the mom-to-be spends most of her time in New York City with husband Cooke Maroney.

In an interview with CBS's Gayle King, the former First Lady sat down with her mother, Marian Shields Robinson, to talk about her role at the White House. Robinson lived there during all eight years of the Obama administration and grew to be the most "beloved figure" in the household.

"As a matter of fact, I had talked [the White House staff] into allowing me to do my own laundry," she told King. She also took care of her granddaughters Malia and Sasha, and taught them how to do laundry, too.

At 20, after Gomez had been constantly in the press for her tumultuous relationship with Justin Bieber and was experiencing growing pains with her mother Mandy Teefey, the actress knew it was time for her to move out of her parents' home. Although she has gone through a couple of different homes since then, including her Tarzana starter house and Fort Worth, Texas estate, Gomez still treasures her childhood home in Grand Prairie, Texas, and visits as often as she can.

While Twilight was having its peak moment in Hollywood, Lautner was just 18 years old and still living at home. At the time, he was the world's highest-paid teen wolf but still helping out with the garbage and mowing the lawn.

After the death of his father in 2011, Cooper's mother moved in with him to cope with the monumental loss. "My family is very close, and my dad dying was brutal for all of us," Cooper said in an interview with Details magazine. "It was a schism, and its aftershock has not stopped. And we need each other. So here we are. But don't get me wrong. It's not without complications. It's not like I live in a compound and she's in the guesthouse. No. She's in the next room. But here's the thing: She's a cool chick. We can hang, and she can roll with the punches. If that wasn't the case, there's no way."

After the infamous Hills couple's downfall, the two retreated to Pratt's parents' beach home in Carpinteria, California, to get back to regular life. "Reacclimating off that high of that fame and lifestyle was really hard," Heidi told Complex in 2015. The Pratts now live in Pasadena, California, with their son Gunner.

The tennis star told The Telegraph in 2011 that he chooses to live with his family because they "cocoon me from the dangerously distracting hurly-burly that comes with money and fame, and create the environment of affection and trust I need to allow my talent to flower." His family's presence and support has clearly made a positive impact because he's currently ranked as the No. 5 tennis player in the world. 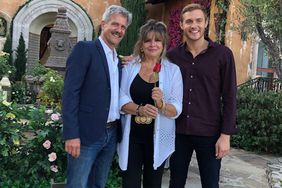