Celebrities Who Are Middle Children

If these celebs have middle child syndrome, they aren't showing it

Interestingly, birth order hasn't affected the Hadid kids much in the public sphere: all three, including older sis Gigi, middle child Bella and younger brother Anwar, are models like their mom.

Sandwiched between brothers Timothy and Pippin, Parker decided to take a turn for all things girly with her eponymous shoe line and Sex and the City role.

If we were diagnosing the characters from the Marvel Universe, Loki is clearly the one with middle child syndrome. In real life, Thor actor Chris Hemsworth embodies many of the best qualities of middle children with his loyal and loving nature — at least, that's what his wife Elsa Pataky says.

In their book The Secret Power of Middle Children, Catherine Salmon and Katrin Schumann write, "Middles aren't the most detail-oriented people." Don't tell that to Manning, second son of Archie and Olivia Manning, who became one of the best quarterbacks in history largely because of his superhuman attention to detail.

Anecdotally, middle children are sometimes known to emphasize their individuality with attention-grabbing fashion choices, particularly at times when they're feeling overshadowed by a sibling. We wonder how Pippa feels.

Born between her brothers, Michael and Thomas, Anne would be the one to grow up in the limelight.

Unlike many middle children, Spears has been in the spotlight ever since she was a child. Still, her classic single "I'm Not a Girl, Not Yet a Woman" could be a metaphor for the insecurities that plague many middles today.

Several years back, a study went around the middle-child message boards claiming that middles are more likely to succeed in life, thanks to their open-minded nature and tolerance for risk. It's tough to say conclusively whether or not this is the case, but Gates, born between two sisters, seems to provide one case study for middles. 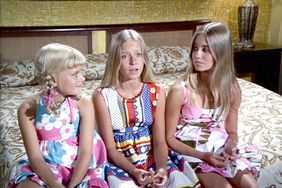 Do These Famous Middle Children Live Up to the Stereotype?