Tom Cruise talks about those butt prothestics rumors. Plus, Fergie and more

— Tom Cruise, shutting down rumors that he used a prosthetic butt in American Made, to Screen Rant

"It's too soon for me to even think about dating. I'm open to love, but it's just too soon."

— Fergie, on not currently pursuing a relationship with anyone after her split from ex Josh Duhamel, on Watch What Happens Live

"I don't know how much I weigh — I haven't weighed myself in twelve years. Top tip, it's a great move!"

— Kate Winslet, on skipping the scale, on The Tonight Show

"… It was a little bit like open-heart surgery … I was proud that I did not cry in front of her. But on the way back, the Secret Service was off, looking straight ahead, pretending they weren't hearing me as I sniffled and blew my nose. It was rough."

— President Barack Obama, on dropping off daughter Malia at college, at the Beau Biden Foundation's golf and tennis invitational

"We already know in each other's lives we don't come first, and that's okay with the both of us. So we do what we need to do, and then when we come together it's fine."

— Simone Biles, opening up about her relationship with boyfriend Stacey Ervin, to PEOPLE

"The balance, it's good. But again, my kids are absolute No. 1. I know that's the truth for most people."

"People were staying stuff like: 'She's pregnant.' 'You're fat.' They were angry or mad that I looked like this. It was one of the hardest things I have ever been through."

— Sasha Pieterse, on being body shamed her 70-lb. weight gain due to a hormone condition called Polycystic Ovary Syndrome, on Dancing with the Stars

"I pray for my country. I pray that we can find more that unites us than divides us. I pray that our nation's leaders want to do the same."

— George Clooney, penning a poem in support of the NFL national anthem protests, for the Daily Beast

"She's still really young, but she has started just sitting there and making fart noises with her mouth and then laughing really hard. So I was like, 'Oh, well, I've taught her everything I know.' "

— Andy Samberg, on his baby girl, on Jimmy Kimmel Live

"One of my psychiatrists [diagnosed me]. He was always saying before this big meltdown, 'You're probably bipolar or borderline, we're just going to have to figure it out.' "

— Pete Davidson, on finding out he has borderline personality disorder, on the WTF With Marc Maron podcast

"I just didn't feel confident in myself, I didn't feel pretty enough. I thought I'd be a supporting character my whole life and I was struggling with the idea of being the star."

— Brie Larson, on how she almost didn't pursue leading roles, to Porter

"Taylor is the kind of soul, as Mandy is the most beautiful of human beings. So the two of them coming together, it's like it's right, and it's good — we're all very happy for them."

— Milo Ventimiglia, on meeting This Is Us costar Mandy Moore's fiancé Taylor Goldsmith, on The Ellen DeGeneres Show

"I am disgusted that a man would even think of saying these absolutely awful words to a woman. You should be ashamed of yourself."

— Lucy Hale, responding to a body shamer, on Twitter

"Fifth Harmony represented this confidence and girl power. I wouldn't be the person or that artist that I feel like I've discovered, so I'm super thankful for that experience."

— Camila Cabello, on her time as a Fifth Harmony member, to Radio Disney

"Having eight limbs moving around is something very alien."

"If he had known, he would have been out there hand over heart. Unfortunately, he wasn't made aware it was time to head to the field as they always do every game."

"Happy Birthday to my sweet heart @skylarastin. You make life better and sweeter every year. I'm so lucky to celebrate with you. Kisses and kisses all day and forever."

"The people have less than zero and they estimate it will cost $11 million dollars to rebuild the town. People are living outside. Doctors are performing medical exams in the street. It's the worst thing I've ever seen."

— Bethenny Frankel, recounting her trip to Mexico to aid earthquake survivors, to PEOPLE

"My baby has a hole in his heart. My dad lives in Puerto Rico. If you think a nasty tweet will shake me, you are mistaken. Beat it, trolls."

"… Ryder's been buzzing his head for a long time. Ryder's like, 'Mom, you're cramping my style.' "

— Kate Hudson, on having the same hairstyle as her son, to Entertainment Tonight

"I'd like to be the fun mom. I know I'm gonna be the dorky mom. So it could be kind of fun, too. I think that would be nice."

— Mindy Kaling, on the type of mom she'll be, to Sunday Today

"He was asking his friends: 'Who is this Kim Kardajan?' He didn't know what my name was."

— Kim Kardashian West, on meeting husband Kanye West, on the Keeping Up with the Kardashians 10th anniversary special

"I believe that it is important to take time to pause and reflect."

"To anyone who has been affected by reproductive coercion, we are deeply sorry. We never expected a lighthearted interview we did poking fun at EACH OTHER and how WE chose together to get pregnant. A goofy moment in Barcelona with our two best friends and the anticipation of our journey together as we went from two to three, to turn into something representing a very serious matter."

— Nikki Reed and Ian Somerhalder, apologizing to fans following their comments about when they decided to get pregnant, on Twitter

"I know people that say it's a very infectious thing to do. Once you have one tattoo you want a lot more. Well, it's always said I have 'Harvey Weinstein' tattooed on my bum, but that's just a secret between Harvey and me."

— Judi Dench, on getting her first tattoo at 81, to Entertainment Weekly

"Some say 3 percent, some say 14 percent. You know it's—it's a very poor prognosis. So I just said, 'I understand. Now we're going to do what we can, get the best doctors we can find and do the best we can, and at the same time celebrate with gratitude a life well lived.' "

— John McCain, opening up about his brain cancer diagnosis, to CBS' 60 Minutes

"I certainly disagree with what he said. I thought it was just divisive. Like I said, I just want to support my teammates. I am never one to say, 'Oh, that is wrong. That is right.' I do believe in what I believe in. I believe in bringing people together and respect and love and trust. Those are the values that my parents instilled in me."

"Last Christmas it was literally me and my wife and two dogs, and this Christmas is going to be my wife, two dogs and two kids. I would say that's the most massive change on the planet."

— Thomas Rhett, on how his life has changed since welcoming two kids with wife Lauren, to PEOPLE

"Nothing you've read or watched on tv compares to the destruction we see with our very eyes."

— Benicio del Toro, reading a letter from a family member who was affected by Hurricane Maria in Puerto Rico, to PEOPLE 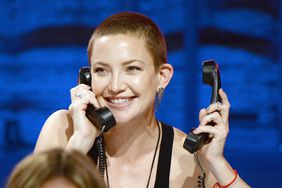