Meryl Streep opens up about the allegations against Harvey Weinstein. Plus, Lupita Nyong'o and more

"This is a door that will not be closed, we've got our foot in their now."

"… Despite having grown up thinking light skin and straight, silky hair were the standards of beauty, I now know that my dark skin and kinky, coily hair are beautiful too."

— Lupita Nyong'o, slamming Grazia for Photoshopping her on their magazine cover, on Instagram

"It was full coitus interruptus."

— Dax Shepard, recalling the time his and wife Kristen Bell's daughters walked in on them having sex, on Jimmy Kimmel Live

— Lea DeLaria, on her current relationship status, to PEOPLE

"You feel guilt when you’re not necessarily in the best mood and you say, 'No, I don’t want to take a photo,' or you're not as happy or bubbly as they probably thought you would be. I’ve had to remind myself that’s okay."

"I have a regret that I am not President."

— Joe Biden, on his past presidential ambitions, to Oprah Winfrey

"Know that your own opinion about yourself matters more than anybody else's. Keep turning up the volume on your own voice, and don’t let other people's voices get louder."

— Emma Roberts, on how people can keep their confidence intact, to Health

"I was as appalled as everyone to read the allegations made in the New York Times. I do not condone sexual misconduct and, in light of the allegations, will not be promoting the movie further."

— Chloë Grace Moretz, on the allegations against I Love You, Daddy filmmaker Louis C.K., to the Los Angeles Times

"I see these young girls that come up to me, and they ask for pictures or autographs, whatever it is, I just… I can't. Every time I look at them, every time I see them smiling, I just think — I just want to create change so that they never, ever have to go through this."

— Aly Raisman, opening up about being abused by USA Gymnastics team doctor Larry Nassar, on 60 Minutes

"Sarah saw interest in Wells, reached out to Wells, and Wells showed interest back. What a beautiful story."

"You know what women do when they get hurt???? They pick themselves up! Go get a haircut. Put on some lipstick and chant 'if you don't have something nice to say… don't say anything at all.'"

— Drew Barrymore, sharing that she treated herself to a day of pampering after receiving hurtful comments on her picture, on Instagram

"I need to hear somebody sing those words of exactly how I'm feeling to get through them."

— Fergie, on turning to female singers during difficult times in her life, to PEOPLE

"I am just here to say that it was all planned, because we thought it would be funny and edgy if we misspelled 'girl,' and made it 'grill' instead."

— Saoirse Ronan, revealing Ed Sheeran lied about the actress misspelling "Galway Girl" while giving the singer a tattoo, on The Late Late Show

"It's the accent. I'm going to marry her before she gets sick of it."

— Kathy Griffin, retracting her apology for her infamous photo with a mask of Donald Trump's bloodied head, to BBC World News program HardTalk

"I was told by a lot of people I'd made a mistake."

— Ezra Miller, on coming out as queer in Hollywood, to ShortList

"A small tweak in someone's life can change them from getting into trouble to getting accepted into college. Kids and teens are like sponges. We can help to mold them positively, to help them understand that there's only winning, no losing. Life isn’t easy, but if they fall down they'll be stronger when they get back up."

— Pitbull, on the importance of being a role model for at-risk youth, to PEOPLE

— Aidy Bryant, on how no longer worrying about her body led to major life changes, to The Cut

"My children have brought so much happiness and joy. To me, they're the very definition of love."

— Elizabeth Smart, on her kids Chloe and James, to PEOPLE

"I'm not shy about it. She was just like, 'What?' She needed to know just like everybody."

— Channing Tatum, on first telling now-wife Jenna Dewan about his stripper past, to Entertainment Tonight

— Mila Kunis, on how she successfully parents with husband Ashton Kutcher, to PEOPLE

"I feel like we need to populate this world with a whole next generation of really good people."

— Hilaria Baldwin, on why she and husband Alec are having "so many children," on Instagram

"It's important for men to step up to the plate and do a little bit of work too. I think all the help we can get is important."

— Zendaya, on how to help women to thrive, to ELLE

"I know when I feel best, so I have to fight the times when I don’t feel my best. I used to drive my poor ex-husband [Nick Cokas] crazy, because I was so thin and saying, 'Oh I'm fat.' I've moved away from that, thankfully, and I’ve grown up."

— Katharine McPhee, on her body confidence, to Health

"He probably would have told me off, and I didn't want to worry him."

— Simon Cowell, on not telling his 3-year-old son about his "scary" fall, at the Music Industry Trust award night

— Lauren Conrad, on husband William Tell's reaction to her haircut, to PEOPLE

"The fact that anybody can actually be in a relationship for a long time with another human being can be pretty amazing, considering how different everybody is from each other."

— Will Arnett, on the pitfalls of dating, to PEOPLE

"I never felt like, honesty, sexually attracted to anybody before him."

— Kelly Clarkson, on husband Brandon Blackstock, during a private show for SiriusXM listeners

"Well, ladies and gentlemen, today I've come to the conclusion that you cannot play around with the internet."

— Sean "Diddy" Combs, revealing he was kidding about changing his name to "Brother Love," on Instagram

— Luke Bryan, on experiencing tremendous amount of tragedy during his road to stardom, to ABC News

"I realized, after Halloween, a lot of little girls, they be looking up to me. They love me, and I’m thinking to myself, like, 'Yo, I really need to be a better example.' "

— Cardi B, on wanting to be a better role model, on Instagram

"… Being a little bit older and a little wiser, the idea of having to explain that movie and the reason behind it to my kids is another issue."

— Mark Wahlberg, on whether or not he would take a role like Boogie Nights, to PEOPLE

"It's the first time I've dated someone younger than me. It's a very trippy thing."

"At the end of the day, they really do love me!!!!! Thank you @khloekardashian and @realtristan13 for loving me in your own special and precious way!!!"

— Kris Jenner, thanking daughter Khloé Kardashian and her boyfriend Tristan Thompson on her birthday, on Instagram

"You never want to see anybody that unhappy. And that to me is what's so sad."

"I met with Harvey at the Peninsula and he didn't try anything on me. I was very lucky. I escaped those clutches."

"You have to realize that the guy next to you is a different color, but he's just trying to support his family and lead a good life, just like you are."

— Maz Jobrani, on wanting to show Americans people from the Middle East are relatable, to PEOPLE

"That's my dream, I want to just be pregnant kind of for the rest of my life."

— Chrissy Teigen, on hoping to add more kids to her and husband John Legend's growing brood, to E! News

— George Clooney, admitting that acting isn't a priority for him, to The Sunday Times

"When you're Gwen you don't go call dibs, you just go get what you want. So she's welcome to anything in my closet."

"I don't know if it was a confidence thing, but I was very shy at one point. I knew what I was about and what I stood for, but I was not very vocal … It took me a couple of years to come out of my shell."

— Rihanna, on finding her voice, to InStyle

"Allison, I know I don't really know you, I just want to be you."

— Kate Winslet, complimenting Allison Janney ahead of their onstage kiss, at the Hollywood Film Awards

"Today I lost my biggest fan."

— Jimmy Fallon, on his mother Gloria's death, to PEOPLE

"What'd you guys do yesterday?"

— Patton Oswalt, announcing he and Meredith Salenger got married, on Twitter

"I try to have as much fun as possible."

— Goldie Hawn, on her age-defying secret, to reporters at her annual Goldie's Love In For Kids event

"He was friends with our friends. He would walk in, say hi, shake hands with like our security or whatever, but like not say hi to us. And then I was like, 'Why do you hate us?' "

— Kourtney Kardashian, recalling how she approached now-boyfriend Younes Bendjima, on Keeping Up with the Kardashians 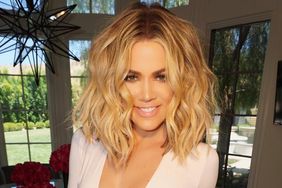