Check out recent style triumphs and trip-ups by Renée Zellweger, Oprah Winfrey, Jessica Alba and others. By Serena Kappes

Newlywed Renée Zellweger is red hot in an off-the-shoulder Carolina Herrera dress at the Hollywood premiere of Cinderella Man.

Talk about clashing: Sharon Stone pairs a feather stole with a geometric-and-floral-print gown during the Cannes Film Festival at a promotional event for her upcoming movie Basic Instinct 2: Risk Addiction.

Oprah Winfrey shows she has all the right curves in a Vera Wang creation featuring waist-flattering ruching at a benefit gala in Washington, D.C.

In her sheer tulle-and-satin gown, a barefoot Kelly Clarkson looks more suited for a goth-themed prom than for her own concert in New York City's Central Park.

What happened, Ms. Jackson? The singer is a fashion fiasco in her layered getup – blazer, pouffy skirt and pants? – at the ASCAP Pop Music Awards in Beverly Hills.

Sin City star Jessica Alba is aglow in a sequined Dolce amp Gabbana frock at a soiree thrown by the Italian designers at the Cannes Film Festival.

Claire Danes looks like she's being attacked by the serpentine neckline festooning her blouse at an awards ceremony in New York City. Topping off the ensemble: a skirt that looks more like drapery.

Halle Berry is a belle indeed in a delicate Azzaro by Vanessa Seward gown at Oprah Winfrey's Legends Ball in Santa Barbara, Calif.

Did someone forget to tell Kristin Davis to get dressed? The Sex and the City star looks like she's wearing her lingerie to a party at the Cartier store in Beverly Hills. 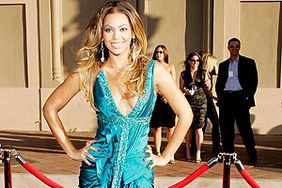