Halle Berry looks fresh and ready for spring in a pleated John Galliano dress at the Hollywood premiere of her TV movie Their Eyes Were Watching God.

Fashion lesson No. 1: A little goes a long way. It's something The O.C.'s Rachel Bilson needs to learn. The actress missed the mark with an oversized belt, tasseled boots and too many necklaces during an appearance on MTV's TRL.

Beyond the Sea actress Kate Bosworth exudes old-school glamor in her sequined chiffon Chloe gown at the Independent Spirit Awards in Santa Monica.

Pamela Anderson, dressed in a too-small crop-top and miniskirt, looks like she's been shopping in the junior's department at the launch of her new (ahem) clothing line in Las Vegas.

Bride-to-be Christina Aguilera is the picture of sophistication in a 1950s-style Monique Lhuillier party dress at the Vanity Fair Oscar party in West Hollywood.

She's all smiles, but Hitch star Amber Valletta has nothing to grin about in her revealing asymmetrical satin-and-velvet dress at the movie's London premiere.

From her shrug to her lace-up suede boots, Las Vegas star Molly Sims is a fashion victim, mixing too many trends during a recent visit to MTV's TRL.

Felicity star Keri Russell is back in the spotlight, and she looks striking in a floral-print wrap dress at the Los Angeles premiere of her new film The Upside of Anger.

Nicky Hilton surely won't be winning any awards for her gaudy fuchsia gown (belly cutouts, sequins and ruffles, oh my!) at the Vanity Fair Oscar party in West Hollywood.

Dressed in red fishnets, a leather zippered skirt and fur jacket, actress Bai Ling (next up in Star Wars: Episode III – Revenge of the Sith) looks like she should be strutting her stuff on a street corner instead of the red carpet at the Berlin Film Festival. 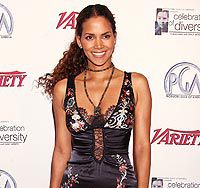